Paris has been the international capital of style for three hundred years. Although challenged by other fashion cities such as Milan, London and New York, Paris remains special. This fascinating book shows that the strength of the French fashion industry rests on the depth and sophistication of its fashion culture. Revised and updated, Paris Fashion is reprinted here in paperback for the first time. More than just a history of famous designers and changing styles, the book is about fashion as a cultural ideal and a social phenomenon. By focusing on a 'case study' of Paris, Steele provides brilliant insights into the significance of fashion in modern urban society.

The author, an internationally recognized authority on the history of fashion, is the author of many books, including Fashion and Eroticism, Women of Fashion: 20th-Century Designers, Fetish: Fashion, Sex & Power, and Fifty Years of Fashion: New Look to Now.
https://www.amazon.com/Paris-Fashion-Cultural-Valerie-Steele/dp/1859739733 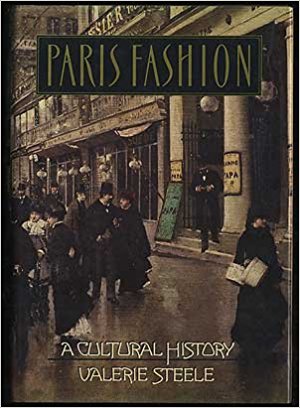 Books of The Times; 'Paris Fashion,' Clothes as Extension of Culture

Paris and fashion have been so closely associated for so long that the link between them must sometimes seem like a fact of nature. But of course it isn't; and in ''Paris Fashion'' Valerie Steele has set out to analyze the phenomenon in terms of social values and culture.

How did Paris acquire its supremacy as the international capital of style, and why, in spite of its relative decline, has it been able to retain such a commanding position? In searching for an explanation, Ms. Steele has found herself writing, as she says, ''a study of ideas about fashion'' rather than ''a history of the fashion industry as such.''

Her answer, briefly, is that Paris fashion has flourished because Paris has had a more sophisticated and more highly developed ''fashion culture'' than any comparable metropolitan center. In a book that calls itself a cultural history, that may sound like a piece of circular reasoning; but by the time you have finished reading her, it is hard not to agree.

Nowhere else were new styles so paraded and so appreciated as they were in 18th-century and 19th-century Paris; nowhere else did fashion have such prestige, or generate such an institutional life of its own, or maintain such friendly connections with the other, less ephemeral arts. It is reasons such as these that account for the triumph of Parisian couture, rather than supposedly unique qualities of invention and craftsmanship.

To account for the fashion culture itself you would virtually have to write a cultural history of France, to explore parallels in other areas (haute cuisine is perhaps the most obvious one) and delve deeper into the general history of taste. But that would be to undertake more than a single book could hope to encompass, except at a superficial level.

As it is, Ms. Steele has achieved some heroic feats of compression, though without clogging her narrative. The story goes back a long way, at least as far as 15th-century Burgundy (''chic black,'' for example, first made its appearance among ''individual Burgundian and Italian dandies who were in the process of renouncing the gay colors of the late Middle Ages''); and at every stage the argument is buttressed with case histories and anecdotes.

The 80 or so illustrations make an important contribution, too. They are not only well chosen but well integrated into the text, and the art of portraying fashion is itself discussed in illuminating detail.

There is a particularly valuable account of the evolution of the fashion plate, from the 18th century onward. It takes in such topics as the neglected achievements of the Colin sisters, outstanding fashion illustrators in the middle years of the 19th century; the international impact of magazines of the same period like Le Moniteur de la Mode, which had eight foreign editions (American, British, German, Russian, Belgian, Italian, Spanish and Portuguese); and the Art Deco fashion plates of artists like Paul Iribe and Georges Barbier, which not only reflected the radically new styles of the years before World War I, but also influenced their development.

Men's clothes as well as women's find a place in the book, most arrestingly in a chapter on Baudelaire, who began as a romantic dandy and gradually turned toward the more austere dandyism of dressing entirely in black - on the face of it, something not so very different from the conventional bourgeois garb of the time. (I hadn't realized until reading Ms. Steele that he designed all his clothes himself.) If Baudelaire is the only poet to figure significantly in ''Paris Fashion,'' two chapters center on the work of major novelists. Balzac, who early in his career wrote a ''Treatise on the Elegant Life,'' may not have practiced what he preached (he was notoriously slovenly in his personal appearance), but Ms. Steele demonstrates that in his fiction he was both an accurate historian of fashion and a keen student of its symbolism. So, in a more subtle way, was Proust, and we are given a good deal of interesting information about both the clothes his characters wear and the couturiers mentioned in his work.

Most of the couturiers, apart from the Italian-born Mariano Fortuny, are only dimly remembered today. Even Mme. Paquin, who presided over more than 2,000 employees in her heyday, barely rates a mention in most fashion histories (although Ms. Steele might have added that she has achieved literary immortality of sorts: there is a reference to her in a much-quoted passage in Ezra Pound's ''Pisan Cantos'').

One result of her research into the careers of figures like Mme. Paquin has been to persuade Ms. Steele - and she persuades the reader in turn -that women have played a much greater role in the history of fashion as designers than the textbooks give them credit for. But she isn't out to prove a simple thesis, feminist or otherwise; and without playing down the extent to which fashion is shaped by wider social forces, she insists that it also has a dynamic of its own.

Only at the end, I think, does she falter: she doesn't really put forward an adequate explanation of how Parisian fashion managed to make such a fighting comeback after World War II. But it's a complicated subject, one that needs more space than she can give it here, and it would be nice to see her returning to it another time.

Meanwhile her book offers many insights and pleasures, including some excellent quotations. I cherish the summing up by a rival designer of the Chanel look, popularly supposed to have been inspired by ''the simple dress of the working girl,'' as ''deluxe poverty,'' and to anyone who takes a sternly disapproving view of fashion as a whole, I commend a reflection of Jean Cocteau: ''Fashion dies very young, so we must forgive it everything.'' 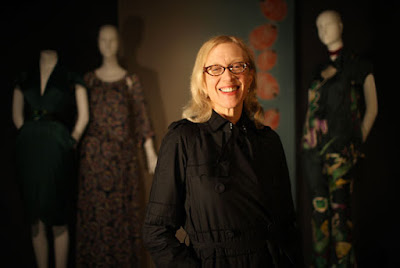 Valerie Steele (Ph.D., Yale University) is Director and Chief Curator of The Museum at the Fashion Institute of Technology (MFIT). She has curated more than 20 exhibitions in the past ten years, including Gothic: Dark Glamour; Love & War: The Weaponized Woman; The Corset: Fashioning the Body; London Fashion; and Femme Fatale: Fashion in Fin-de-Siècle Paris.

Editor-in-chief of Fashion Theory: The Journal of Dress, Body & Culture (Berg Publishers), which she founded in 1997, Dr. Steele is also the author of numerous books, including Gothic: Dark Glamour; The Corset: A Cultural History; Paris Fashion; Fifty Years of Fashion: New Look to Now; Fetish: Fashion, Sex and Power; and Women of Fashion: 20th-Century Designers. She was editor-in-chief of the three-volume Encyclopedia of Clothing and Fashion. Her latest book was Isabel Toledo: Fashion from the Inside Out, which she co-authored with Patricia Mears, in conjunction with an exhibition of the same name. She is currently working on a book and exhibition, Japan Fashion Now.

Dr. Steele lectures frequently and has appeared on many television programs, including The Oprah Winfrey Show and Undressed: The Story of Fashion. After she appeared on the PBS special, The Way We Wear, she was described in The Washington Post as one of “fashion’s brainiest women.” Often quoted in media, she was herself the subject of profiles in Forbes: “Fashion Professor” and in The New York Times: “High-Heeled Historian,” as well as being listed in the New York Daily News “Fashion’s 50 Most Powerful.”
Publicada por Jeeves em 21:48