Beneath The Crown: The True Story of Young Diana // The Crown finally gets Princess Diana right 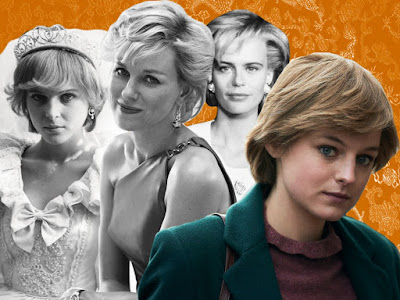 The Crown finally gets Princess Diana right – why did it take so long?

For someone with the most cinematic life imaginable, Princess Diana has been like kryptonite to film and television, writes Adam White

Princess Diana was cinema. Rebellious, compassionate, tragic, she seemed to exist in widescreen. There was never any subtlety to her, from her fashion to her frankness to the public spectacle of her death. Yet despite living such a cinematic life, Diana’s story has never worked on screen. Netflix’s The Crown, which this season introduces Diana as played by actor Emma Corrin, is the latest to try. Early reviews have been kind, Corrin in particular drawing strong notices, but it is some miracle, with Diana’s chequered on-screen history suggesting hers is a story very easy to get wrong.

Corrin follows in the footsteps of Naomi Watts in the maligned 2013 biopic Diana, and precedes Kristen Stewart in an untitled Princess of Wales film to be released next year. After that, Elizabeth Debicki will take over from Corrin for the final two seasons of The Crown, which will launch sometime in 2022. Over the past few decades, there have also been a variety of treacly television movies, ones that consistently airbrushed her spikiness. Every portrayal, bar Corrin’s, has been a different shade of ghastly.

Few have ever got the balance right. Diana (2013) was too saccharine, The Crown meets Mills & Boon, with Watts huffing and puffing her way through hospital corridors and country houses. The Royal Romance of Charles and Diana (1982) was too soon, released a year after their wedding and built on the lie that they were at all compatible. 1998’s Channel 5 rush job A Tribute to the People’s Princess was too plainly terrible, shot on what looked like soap opera sets and featuring a script so risible that a computer programme may as well have written it. “The press are driving me potty!” Amy Seccombe’s Diana yelps at one point.

All reflected the idea that no dramatisation of Diana could live up to our own personal standards. Diana became as celebrated as she was because she had a unique humanity to her, with a personality that was unusually malleable. Some admired her for her beauty and grace, others for her defiance in the face of ill-treatment. Even the most die-hard of republicans remember her with begrudging respect, unable to deny the good she did for mental health and Aids in the public eye. And that she seemed to loathe the royals almost as much as they do.

Younger millennials, meanwhile, tend to embrace her oddly ageless street-style and existence as a kind of proto-Gone Girl. She was the wronged woman who flourished, outsmarting the powerful figures who thought they knew better, and looking incredible while doing it. “Good for her,” they say, while retweeting that same image of her 1994 “revenge dress” – or the off-the-shoulder number she wore to a gala the same night Charles tried and failed to win back the public’s affection with a televised interview. @LadyDiRevengeLooks is an Instagram account with more than 60,000 followers.

Diana, both then and now, is a woman of endlessly rotating parts. It feels as if things are missing if one is more focused on than the others. It’s also why the best dramatisations of Diana so far have depicted her in abstract. The Queen (2006), set in the immediate aftermath of Diana’s death, treated the late Princess as if she were the San Andreas Fault, capable of sending almighty shockwaves through tradition and legacy. Diana & Me (1997), a cute Toni Collette romcom shelved after Diana died, was driven by the idea of the Princess as an aspirational idea. It’s essentially Muriel’s Wedding with a tiara, and only available on German DVD.

They were also successful because they didn’t treat the Diana story as one that was necessarily over. Diana may have died in that Paris car crash, but she continues to loom over much of the Royal Family, the media, and culture at large. British royalty will never again embrace stiff self-isolation, their very survival dependent on the same empathy and openness that Diana masterminded as a public figure and parent.

She is also invoked whenever we speak of press intrusion, her dying breaths trailed by flashbulbs. Similarly, it’s not hard to see Diana’s personal life as a blueprint for our understanding of infidelity and trauma. Our collective understanding of affairs became more complex in the wake of Charles and Diana and the mutual betrayals of their marriage vows. Likewise the idea of “winning” a divorce – who looks better, who earns greater sympathy, who keeps the friends and the power. Mental illness became less shameful, Aids became a story of human tragedy rather than one discussed at a cold and painful remove.

The Princess Diana myth is far more than a dozen or so incredibly dramatic moments in Royal history spread over the course of two decades – it is about how we’ve existed for 40 years. With that in mind, it’s no real surprise that The Crown is reportedly the first to pull off telling her story, the show’s format (entire decades, give-or-take, being dramatised every series, and actors being swapped out as their characters age) allowing for greater psychological insight and more room to breathe. Considering how long it has been since Diana’s death, and how often film and television have got her wrong, it’s about time.