The Crown Season 4 | Costumes of The Crown | Netflix // Why Do We Care So Much About Diana’s Dresses?

Why Do We Care So Much About Diana’s Dresses?

“The Crown,” Season 4, has raised the question again. The answer may not be what you expect. 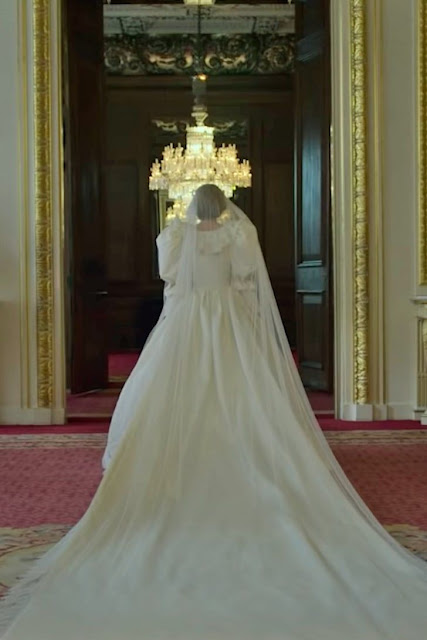 And so, once again, to Princess Diana. Like Jacqueline Kennedy Onassis, she has become a sort of cultural Rosetta Stone we return to over and over, seeking to discover answers to our own choices in her limpid blue stare and cacophonous, attention-grabbing wardrobe.

This time around the re-examination comes courtesy of “The Crown,” Season 4, a.k.a. the Diana Season. The scrutiny has been building since the 20th anniversary of the princess’s death in 2017, when Virgil Abloh declared Diana his Off-White muse and Kensington Palace held an exhibition devoted to her outfits. And though it got a boost last year with a new musical (with costumes by William Ivey Long and a featured song titled “The Dress”) that was supposed to be headed to Broadway, the chatter reached a fresh apogee this weekend with the release of the Netflix show.

The one where the princess, in the form of the actress Emma Corrin, catches the Windsor eye, makes her public debut, gets married and miserable, develops an eating disorder and becomes a Fashion Icon nonetheless.

The one that inspired British Vogue to put Ms. Corrin on the cover of its October issue in a sapphire blue Oscar de la Renta taffeta ball gown with the headline “Queen of Hearts.” The one that has been the subject of a 3-D virtual show at the Brooklyn Museum, “The Queen and the Crown,” featuring assorted items from the series’s costume department, including a raspberry floral two-piece dress made for the princess’s Australian tour and the remake of that famous merengue of an overblown wedding dress.

The one that has spawned Twitter thread after Twitter thread comparing true outfit to fictional outfit, and paean after paean to Diana’s Greatest Fashion Moments in pretty much every single glossy magazine.

Why do they matter? It’s not really about the dresses, people. It’s about how they got us to now.

After all, if there’s one thing “The Crown” does with its fealty to the clothes that were, it is to show how cringe-worthy some of those fashion moments actually were. (Amy Roberts, the costume designer, has said that she didn’t recreate them exactly but rather tried to capture their essence, just as Peter Morgan, the show’s creator, talks about his allegiance to historical truth over accuracy.) The pie-crust collars and sailor bibs and pussy bows. The frumpy, Laura Ashley puff-sleeve smocks and midi-skirts. The novelty knitwear. The Easter egg overalls and gingham.

The saccharine mash-up of romance and posh schlubbiness teetering delicately between pastoral and kitsch before blossoming into pure Disney fantasy: taffeta, velvet, iridescent blues — the frumpy duckling turning into a polka-dot-and-silk-swathed swan.

Right now, understandably, we can’t get enough of such vicarious fashion exposition, given our loungewear-limned reality. The hazy, sentimental lens of nostalgia can make even the pretty bad delicious, in an ironic, self-aware way. Rowing Blazers has already rereleased Diana’s famous black sheep sweater — the one she wore to a couple of her husband’s polo matches — to so much hoo-ha that even at $295 it is available for order only and will not arrive until January at the earliest. And this is only Diana, Episode 1.

The famous shirred black “revenge dress” the princess wore to a gala in 1994, the same evening her husband confessed his affair to the BBC, and the more body-con designer outfits of her divorce years are still to come, perhaps in Season 5. As are the John Galliano-designed Dior slip dress worn to the Met gala in 1996 and the Versace column worn on a tour of Australia the same year. Ditto the simpler button-ups and chinos that became the uniform of her humanitarian work. And the tragedy that froze her in time.

Plus, there’s yet another Diana project, the feature film “Spencer,” starring Kristen Stewart, waiting in the wings.

Despite all of this, Alexandra Shulman, the editor of British Vogue during Diana’s heyday and current contrarian columnist for The Daily Mail, wrote in a recent piece, “Princess Diana was dazzling, but it’s nonsense to claim she was a fashion inspiration.”

It sounds like sacrilege. But she’s right. Diana didn’t send designers or fans spinning out in new directions because she put her clothes together in an especially creative inventive way, or because she gravitated toward the outré and imaginative, which she then wore with such élan that she left a trail of ideas in her wake. (Indeed, she was introduced to fashion by Anna Harvey, then the deputy editor of British Vogue and Diana’s designer conduit, who does not appear to be part of “The Crown” cast of characters.) Diana wasn’t one of those public figures with an identifiable and consistent personal style, though she clearly loved to get dressed.

Rather, the greatest trend she ever set — bigger than the fad for engagement rings with oval sapphires surrounded by diamonds, or the biggest of her big shoulders — was as the original fashion reality TV star: a public figure who used her clothes as a personal weather vane, not to advance the agenda of state but for direct communication to the outside world, even when she was simply smiling and standing by. She wore her emotions not just on, but as, her sleeves. And because we could all see them, we could all relate.

As Joe DiPietro, who wrote the book for the Diana musical (due next spring on Netflix, of course, since theater is on hold during the pandemic), told Elizabeth Holmes in her prescient new book, “HRH: So Many Thoughts on Royal Style,” which traces the dress histories and strategies of the women of Windsor from the queen through Kate Middleton and Meghan Markle: “She really was the first great social media influencer, manipulator.”

It’s part of what made her mesmerizing, and it’s what makes her seem so relevant. It is, arguably, why every garment Melania Trump wears is parsed for what it says about her marriage, why Kim Kardashian’s clothing evolution since she became a West has been so closely tracked. Diana primed the stage, and now we are all living in it.

She didn’t move the art of dress forward; she kept it spinning right where it was. But in doing so, as Mr. DiPietro said, she helped make the art of Instagram possible.

Vanessa Friedman is The Times's fashion director and chief fashion critic. She was previously the fashion editor of the Financial Times. @VVFriedman