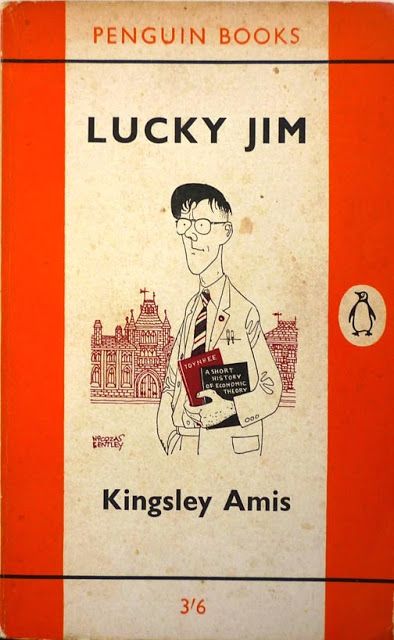 Lucky Jim is a novel by Kingsley Amis, first published in 1954 by Victor Gollancz. It was Amis's first novel and won the 1955 Somerset Maugham Award for fiction. The novel follows the exploits of the eponymous James (Jim) Dixon, a reluctant lecturer at an unnamed provincial English university.

It is supposed that Amis arrived at Dixon's surname from 12 Dixon Drive, Leicester, the address of Philip Larkin from 1948 to 1950, while he was a librarian at the university there. Lucky Jim is dedicated to Larkin, who helped to inspire the main character and contributed significantly to the structure of the novel.

Time magazine included Lucky Jim in its TIME 100 Best English-language Novels from 1923 to 2005.

Jim Dixon is a lecturer in medieval history at a red brick university in the English Midlands. He has made an unsure start and, towards the end of the academic year, is concerned about losing his probationary position in the department. In his attempt to be awarded a permanent post he tries to maintain a good relationship with his absent-minded head of department, Professor Welch. To establish his credentials he must also ensure the publication of his first scholarly article, but he eventually discovers that the editor to whom he submitted it has translated it into Italian and passed it off as his own.

Dixon struggles with an on-again off-again "girlfriend", Margaret Peel, a fellow lecturer who is recovering from a suicide attempt in the wake of a broken relationship with another man. Margaret employs emotional blackmail to appeal to Dixon's sense of duty and pity while keeping him in an ambiguous and sexless limbo. While she is staying with Professor Welch, he holds a musical weekend that seems to offer an opportunity for Dixon to advance his standing among his colleagues. The attempt goes wrong, however, and the drunken Dixon drops a lighted cigarette on the bed, burning a hole in the sheets.

During the same weekend Dixon meets Christine Callaghan, a young Londoner and the latest girlfriend of Professor Welch's son, Bertrand, an amateur painter whose affectedness particularly infuriates Dixon. After a bad start Dixon realises that he is attracted to Christine, who is far less pretentious than she initially appears.

Dixon's growing closeness to Christine upsets Bertrand, who is using her to reach her well-connected Scottish uncle and get a job from him. Then Dixon rescues Christine from the university's annual dance after Bertrand treats her offhandedly, and takes her home in a taxi. The pair kiss and make a date for later, but Christine admits that she feels guilty about seeing Dixon behind Bertrand's back and about Dixon's supposed relationship with Margaret. The two decide not to see each other again, but when Bertrand calls on Dixon to "warn him off the grass" he cannot resist the temptation to quarrel with Bertrand, until they fight.

The novel reaches its climax during Dixon's public lecture on "Merrie England". Having attempted to calm his nerves by drinking too much, he caps his uncertain performance by denouncing the university culture of arty pretentiousness and passes out. Welch lets Dixon know privately that his employment will not be extended, but Christine's uncle offers Dixon the coveted job of assisting him in London. Later Dixon meets Margaret's ex-boyfriend, who reveals that he had not been her fiancé, as she had claimed. Comparing notes, the two realise that the suicide attempt was faked as a piece of neurotic emotional blackmail.

Feeling free of Margaret at last, Dixon responds to Christine's phoned request to see her off as she leaves for London. There he learns from her that she is leaving Bertrand after being told that he was having an affair with the wife of one of Dixon's former colleagues. They decide to leave for London together, and then walk off arm in arm, outraging the Welches as they pass on the street.

When originally published, Lucky Jim received enthusiastic reviews. In the New Statesman, Walter Allen wrote, "Mr Amis has an unwaveringly merciless eye for the bogus: some aspects of provincial culture – the madrigals and recorders of Professor Welch, for instance – are pinned down as accurately as they have ever been; and he has, too, an eye for character – the female lecturer Margaret, who battens neurotically on Jim's pity, is quite horribly well done. Mr Amis is a novelist of formidable and uncomfortable talent."

W. Somerset Maugham praised Amis' writing while disdaining the new generation he represented: "Mr. Kingsley Amis is so talented, his observation is so keen, that you cannot fail to be convinced that the young men he so brilliantly describes truly represent the class with which his novel is concerned... They have no manners, and are woefully unable to deal with any social predicament. Their idea of a celebration is to go to a public bar and drink six beers. They are mean, malicious and envious... They are scum."

In response to Maugham's criticism of the new generation, the New Statesman and The Nation held contests to get readers to respond to Maugham in the voice of Jim Dixon.

Retrospective reviews have solidified its legacy as one of Amis' finest novels. Christopher Hitchens described it as the funniest book of the second half of the 20th century, writing: "Lucky Jim illustrates a crucial human difference between the little guy and the small man. And Dixon, like his creator, was no clown but a man of feeling after all."

Olivia Laing, writing in The Guardian: "Remarkable for its relentless skewering of artifice and pretension, Lucky Jim also contains some of the finest comic set pieces in the language." 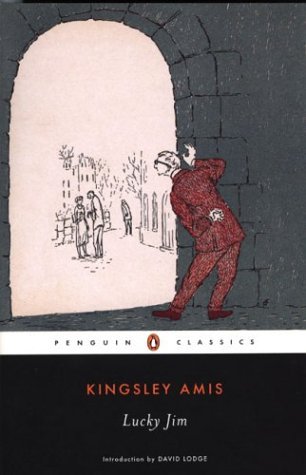 Regarded by many as the finest, and funniest, comic novel of the twentieth century, Lucky Jim remains as trenchant, withering, and eloquently misanthropic as when it first scandalized readers in 1954. This is the story of Jim Dixon, a hapless lecturer in medieval history at a provincial university who knows better than most that “there was no end to the ways in which nice things are nicer than nasty ones.” Kingsley Amis’s scabrous debut leads the reader through a gallery of emphatically English bores, cranks, frauds, and neurotics with whom Dixon must contend in one way or another in order to hold on to his cushy academic perch and win the girl of his fancy.

More than just a merciless satire of cloistered college life and stuffy postwar manners, Lucky Jim is an attack on the forces of boredom, whatever form they may take, and a work of art that at once distills and extends an entire tradition of English comic writing, from Fielding and Dickens through Wodehouse and Waugh. As Christopher Hitchens has written, “If you can picture Bertie or Jeeves being capable of actual malice, and simultaneously imagine Evelyn Waugh forgetting about original sin, you have the combination of innocence and experience that makes this short romp so imperishable.”

Lucky Jim illustrates a crucial human difference between the little guy and the small man. And Dixon, like his creator, was no clown but a man of feeling after all.

Mr. Kingsley Amis is so talented, his observation is so keen, that you cannot fail to be convinced that the young men he so brilliantly describes truly represent the class with which his novel is concerned….They have no manners, and are woefully unable to deal with any social predicament. Their idea of a celebration is to go to a public bar and drink six beers. They are mean, malicious and envious….They are scum.

’After Evelyn Waugh, what?’ this reviewer asked six years ago….The answer, already, is Kingsley Amis, the author of Lucky Jim….Satirical and sometimes farcical, they are derived from shrewd observation of contemporary British life, and they occasionally imply social morals….Lucky Jimis extremely funny. Everyone was much amused, and since it is also a kind of male Cinderella or Ugly Duckling story, it left its readers goo-humored and glowing.

I was recommended [Kinglsey Amis’ Lucky Jim] when I was a teenager trying to figure out how to start reading “serious” books. Great recommendation, because on the surface it’s nothing of the sort, but it is brilliant.

Remarkable for its relentless skewering of artifice and pretension, Lucky Jim also contains some of the finest comic set pieces in the language.

Remarkably, Lucky Jim is as fresh and surprising today as it was in 1954. It is part of the landscape, and it defines academia in the eyes of much of the world as does no other book, yet if you are coming to it for the first time you will feel, as you glide happily through its pages, that you are traveling in a place where no one else has ever been. If you haven’t yet done so, you must.

Lucky Jim is an extremely interesting first novel, and parts of it are very funny indeed: the episodes of the bed-burning and Jim’s public lecture, for instance, mount to the complexity and tension of certain passages in the Marx Brothers’ films or in the paper-hanging act one still sees from time to time in pantomime. And Mr Amishas an unwaveringly merciless eye for the bogus: some aspects of provincial culture—the madrigals and recorders of Professor Welch, for instance—are pinned down as accurately as they have ever been; and he has, too, an eye for character—the female lecturer Margaret, who battens neurotically on Jim’s pity, is quite horribly well done. Mr Amis is a novelist of formidable and uncomfortable talent. 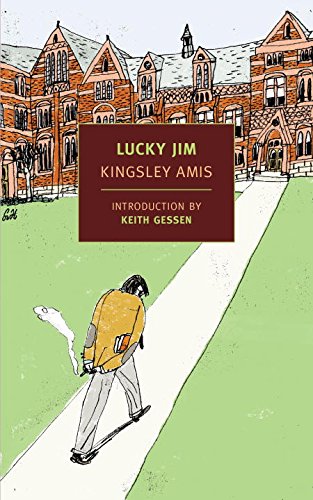 Kingsley Amis's acerbic debut is a tour de force – but don't read it on the bus, warns Olivia Laing

Has there even been a writer so choked with bile as Kingsley Amis? None of his novels look particularly kindly upon his fellow man, but Lucky Jim, his first, is driven by a particularly epic disdain for the idiocies, pedantries, mindless rules and unpleasant personal habits with which humanity is cursed. The titular Jim Dixon is an academic of a pretty poor sort, a medievalist who only picked the period because it looked like a soft option. Having clawed his way into a second-rate university he manages to cram the occasional desultory lecture around the more urgent business of persuading pretty girls to take his classes. Despite this non-specific lust, he does have a girlfriend of sorts: the grotesque Margaret, whose "tinkle of tiny silver bells" laugh will freeze the heart of any would-be coquette.

Remarkable for its relentless skewering of artifice and pretension, Lucky Jim also contains some of the finest comic set pieces in the language. One of the more brilliant concerns a weekend at the home of a ghastly senior professor. After an afternoon of enforced madrigals, Jim becomes so horribly drunk that he inadvertently destroys his host's spare room. His attempts to make good the damage while labouring under a painfully accurately described hangover is so wildly funny as to make the book unsuitable for consumption on public transport.

Jim is more appealing than some of Amis's later heroes; his hatreds – expressed viscerally through a vast repertoire of grotesque faces – are infectious, while his increasingly elaborate attempts to dig himself out of trouble rarely have the desired effect. The result is a novel in the grand tradition of English satire, in which irritants large and small – rude waiters, manipulative women, cliches, affectation and the price of beer – conspire to create a comic howl of hatred of ear-splitting volume and force.