Cavalry of the Napoleonic Era: Cuirassiers, Dragoons, Hussars, and Lancers 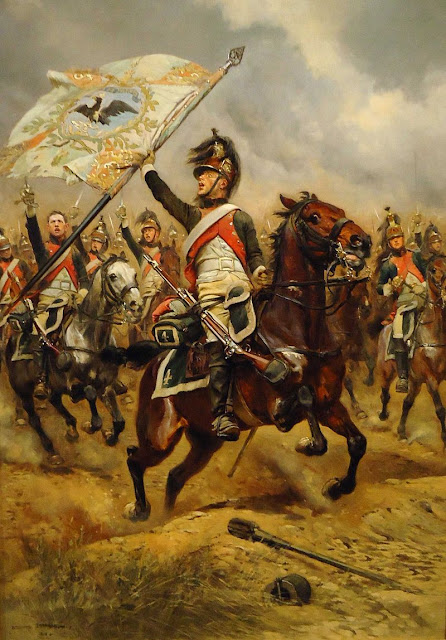 During the Napoleonic Wars, dragoons generally assumed a cavalry role, though remaining a lighter class of mounted troops than the armored cuirassiers. Dragoons rode larger horses than the light cavalry and wielded straight, rather than curved swords. Emperor Napoleon often formed complete divisions out of his 30 dragoon regiments and used them as battle cavalry to break the enemy's main resistance. In 1809, French dragoons scored notable successes against Spanish armies at the Battle of Ocana and the Battle of Alba de Tormes.

British heavy dragoons made devastating charges against French infantry at the Battle of Salamanca in 1812 and at the Battle of Waterloo in 1815. 31 regiments were in existence at the height of the Napoleonic Wars: seven Dragoon Guards regiments and 24 cavalry of the line regiments. The Dragoon Guards and Dragoon regiments were the heavy cavalry regiments of the British Army, although by continental standards they were not the heaviest type of cavalry since they carried no armour (unlike cuirassiers). While some of the cavalry regiments of the line were simply designated as regiments of dragoons, the lighter cavalry regiments, which were particularly mobile, became regiments of Light Dragoons, employing the 1796-pattern light cavalry sabres. From 1805 four regiments of Light Dragoons were designated Hussars (7th, 10th, 15th and 18th Regiments), differentiated by uniform, and the wearing of mustaches. After the end of the Napoleonic Wars (starting in 1816) some regiments became lancers, identified by the lances that they carried. 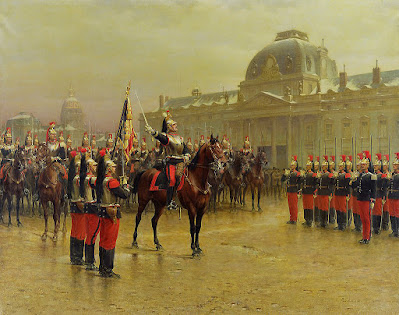 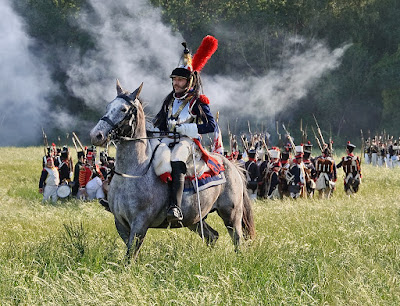 Cuirassiers  French cuirassier were cavalry equipped with a cuirass, sword, and pistols. Cuirassiers first appeared in mid-to-late 16th-century Europe and were produced as a result of armoured cavalry, such as the men-at-arms and demi-lancers, discarding their lances and adopting the use of pistols as their primary weapon. In the later part of the 17th century, the cuirassier lost his limb armour and subsequently employed only the cuirass (breastplate and backplate), and sometimes a helmet. By this time, the sword or sabre had become their primary weapon, pistols being relegated to a secondary function.

Cuirassiers achieved increased prominence during the Napoleonic Wars and were last fielded in the opening stages of World War I. Cuirassiers continue to be employed as ceremonial troops by a number of countries. The French term means "one with a cuirass" (cuirasse), the breastplate armour which they wore.

Though the armour could not protect against contemporary flintlock musket fire, it could deflect shots fired from long-range, stop ricochets and offer protection from all but very close range pistol fire. More importantly, in an age which saw cavalry used in large numbers, the breastplates (along with the helmets) provided excellent protection against the swords and lances of opposing cavalry and against infantry equipped with bayonets. It also had some psychological effect for the wearer (effectively making the cuirassier more willing to plunge into the thick of fighting) and the enemy (adding intimidation), while it also added weight to a charge, especially in cavalry versus cavalry actions.

The utility of this armour was sometimes disputed. Prussian cuirassiers had abandoned the armoured cuirass before the Napoleonic Wars, but were reissued with it in 1814. During this period, a single British cavalry regiment (Royal Horse Guards) wore cuirasses during the Netherlands campaign of 1794, using breastplates taken from store. The Austrian cuirassiers traded protection for mobility by wearing only the half-cuirass (without back plate) and helmet. Napoleon believed it sufficiently useful that he had cuirassier-style armour issued to his two carabinier regiments after the Battle of Wagram. The Russians, having abandoned Austrian-style half-cuirasses in 1801, reissued full cuirasses in 1812 for all Army and Guard cuirassier regiments, with troops receiving them during the summer 1812 and wearing cuirasses at Borodino. After Battle of Tarutino the Pskov dragoon regiment received captured French cuirasses and was officially upgraded to a cuirassier regiment. Despite being metallurgically more advanced than the plate armour of old, the Napoleonic era cuirass was still quite cumbersome and hot to wear in warm weather; however, the added protection that it gave to the wearer and the imposing appearance of an armoured cavalryman were factors favouring retention. 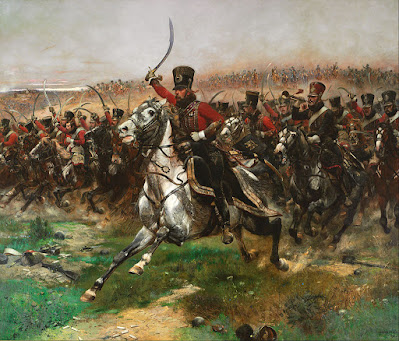 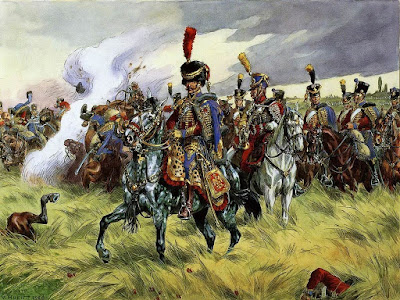 The hussars played a prominent role as cavalry in the Revolutionary Wars (1792–1802) and Napoleonic Wars (1803–15). As light cavalrymen mounted on fast horses, they would be used to fight skirmish battles and for scouting. Most of the great European powers raised hussar regiments. The armies of France, Austria, Prussia, and Russia had included hussar regiments since the mid-18th century. In the case of Britain, four light dragoon regiments were converted to hussars in 1806–1807.

The hussars of the period created the tradition of sabrage, the opening of a champagne bottle with a sabre. Moustaches were universally worn by Napoleonic-era hussars; the British hussars were the only moustachioed troops in the British Army—leading to their being taunted as being "foreigners", at times. French hussars also wore cadenettes, braids of hair hanging on either side of the face, until the practice was officially proscribed when shorter hair became universal.

The uniform of the Napoleonic hussars included the pelisse, a short fur-edged jacket which was often worn slung over one shoulder in the style of a cape and was fastened with a cord. This garment was extensively adorned with braiding (often gold or silver for officers) and several rows of buttons. The dolman or tunic, which was also decorated in braid, was worn under it. The hussar's accoutrements included a Hungarian-style saddle covered by a shabraque, a decorated saddlecloth with long, pointed corners surmounted by a sheepskin.

On active service, the hussar normally wore reinforced breeches which had leather on the inside of the leg to prevent them from wearing due to the extensive time spent in the saddle. On the outside of such breeches, running up each outer side, was a row of buttons, and sometimes a stripe in a different colour. A shako or fur kolpac (busby) was worn as headwear. The colours of the dolman, pelisse and breeches varied greatly by regiment, even within the same army.

The French hussar of the Napoleonic period was armed with a brass-hilted sabre, a carbine and sometimes with a brace of pistols, although these were often unavailable. A famous military commander in Bonaparte's army who began his military career as a hussar was Marshal Ney, who, after being employed as a clerk in an iron works, joined the 5th Hussars in 1787. He rose through the ranks of the hussars in the wars of Belgium and the Rhineland (1794–1798), fighting against the forces of Austria and Prussia before receiving his marshal's baton in 1804, after the Emperor Napoleon's coronation.

In the British Army, hussar cavalry were introduced at a later date than in other major European armies. Towards the end of the 18th century, British light dragoon regiments began to adopt hussar style accoutrements such as laced jackets, pelisses and sabretaches. In 1805, four light dragoon regiments were permitted to use the "hussar" name, initially in parentheses after their regimental title, and adopted full hussar uniforms. British hussars were armed with, in addition to firearms, the highly regarded 1796-pattern light-cavalry sabre.

There were several Russian regiments of hussars by the time of Napoleonic Wars and extensive use was made of them. 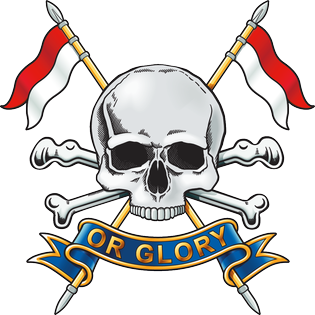 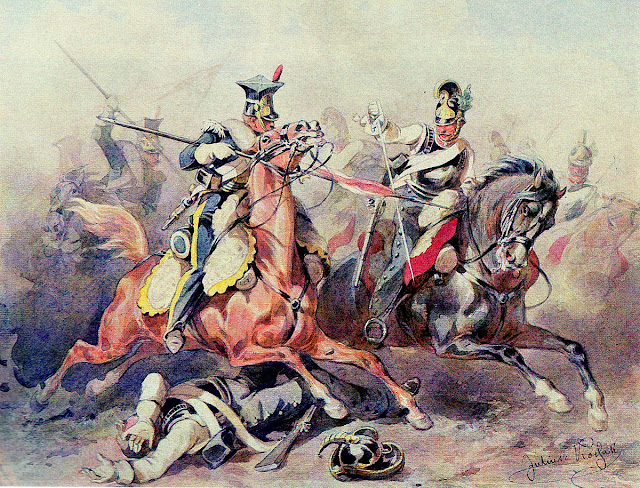 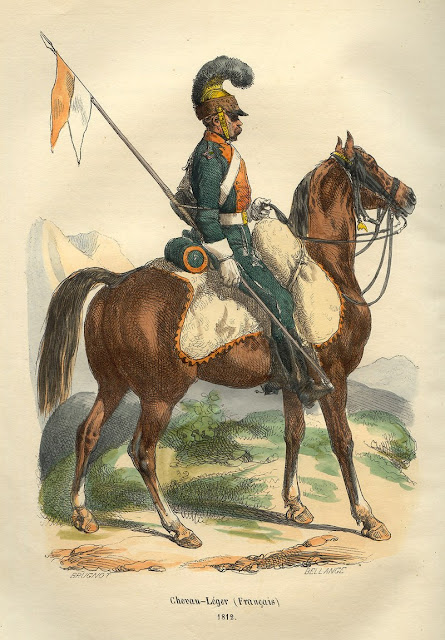 However, during the Napoleonic Wars, lancers were to be seen in many of the combatant nations as their value in shock tactics became clear. During the wars, the Poles became a ready source of recruitment for several armies, willingly or unwillingly. Polish lancers served with distinction in the Austrian, Prussian, Russian, and French armies, most famously in Napoleon's French Imperial Guard as the 1er Regiment de Chevau-Legers-Lanciers de la Garde Impériale.

At the Battle of Waterloo, French lances were "nearly three meters (about nine feet, ten inches) long, weighed three kilograms (about six pounds, ten ounces), and had a steel point on a wooden staff," according to historian Alessandro Barbero. He adds that they were "terrifyingly efficient." Commander of the French 1st Corps, 4th Division General Durutte, who saw the battle from the high ground in front of Papelotte, would write later, "I had never before realized the great superiority of the lance over the sword."

Although having substantial impact in the charge, lancers could be vulnerable to other cavalry at close quarters, where the lance proved a clumsy and easily deflected weapon when employed against sabres. By the late 19th century, many cavalry regiments in European and Asian armies were composed of troopers with lances, as primary weapons, in the front rank and horsemen with sabres only in the second: the lances for the initial shock and sabres for the subsequent mêlée that would follow suit.