A great lover of the dramatic arts, Marie-Antoinette eventually grew tired of the temporary stages knocked together for performances in the gallery of the Grand Trianon and the orangery of the Petit Trianon. Once she had decided to commission her personal architect Richard Mique to build her a real theatre, work was completed in spring 1780, and the official inauguration was on 1 June. 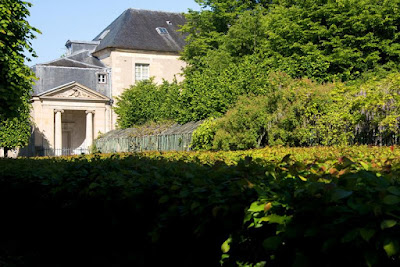 Cleverly tucked away amidst the foliage of the gardens, the entrance to the theatre is a discreet portico in the classical style. The theatre itself was large enough to seat two hundred and fifty spectators, in a décor dominated by blue, white and gold. The sculpted decorations were created using the quick (and cheap) technique of papier mâché, in which the craftsmen of the Menus Plaisirs were acknowledged experts. The various shades of gold blend harmoniously with the false marble panelling dominated by violet tones. The ceiling, painted by Lagrenée, was completed just a few days before the inauguration of the theatre and depicted Apollo surrounded by the Graces and Muses. The original was replaced by a copy in the 19th century. The vast stage (eight layers, two floors below stage level and two in the rafters), was expertly fitted out by mechanical specialist Pierre Boullet, successor to Blaise-Henri Arnoult, who designed the machinery of the Royal Opera House. The orchestra pit has room for around twenty musicians. 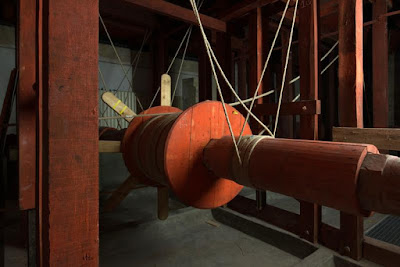 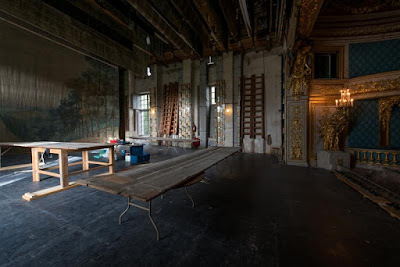 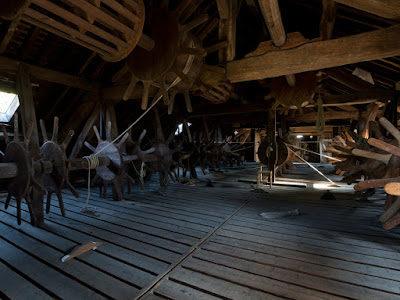 The queen intended the Trianon theatre to play a double role: it needed to provide a stage for the works commissioned from the artist of the Royal Academy of Music, and thus offer satisfactory technical facilities, but it also needed to allow the queen to indulge her passion for amateur dramatics and to put on comedies with her friends whenever she fancied. Between 1780 and 1785 Marie-Antoinette used her theatre for both purposes. She commissioned new works which reflected her interest in the music of the day. Featured artists included Gluck, Grétry, Sacchini and Paisiello, whose Barber of Seville, first performed in Saint Petersburg for Catherine II, had its French premiere at the Trianon theatre in 1784. Falling out of favour with the queen after 1785, the theatre survived the revolutionary period relatively unscathed. It was used occasionally in the nineteenth and early twentieth centuries and underwent restoration between 1925 and 1936 and again in 2001.

The original machinery has been restored to working order, making the Trianon theatre the only eighteenth-century theatre in France which is still intact and fully-functioning. Along with an exceptional set dating from 1754 and showing the temple of Minerva from the first act of Quinault and Lully’s Thésée - designed by the Slodtz brothers for the theatre at Fontainebleau - the Queen’s Theatre still has various items of scenery (including two full sets) produced in the nineteenth century by Pierre-Luc-Charles Cicéri and his workshop: a ‘rustic interior’, a forest, and fragments of a public square and ‘rich salon’.

On account of its small size and distance from the palace, the auditorium is no longer used for performances. This has helped to preserve the theatre in its original condition, without the need to install modern safety features which would inevitably compromise its period authenticity. The theatre is still open to the public as part of the guided tour ‘Special effects at the Queen’s Theatre’, which includes a live demonstration of how the sets were changed.

Marie-Antoinette's personal theatre gets a 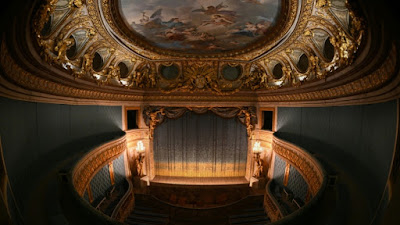 Pandemic or not, it's a theatre space that very rarely sees an audience: Marie-Antoinette's personal playhouse in the grounds of Versailles is a fragile historical gem in need of delicate care.

The late 18th century was a time of "theatre-mania" in which many wealthy princes and financiers built their own stages on their estates, said Raphael Masson, lead conservator at Versailles.

The last queen of France before the revolution was a passionate fan of music and theatre, and had hers built deep in the grounds of the chateau where she could escape with her retinue.

It was here, in 1785, that she gave her own last performance on stage, as Rosine in "The Barber of Seville" in front of its author, Beaumarchais.

Today, it is the only 18th century theatre in France to still have its original working machinery -- "a miracle of conservation", said Masson.

It has three sets -- a rustic interior, a forest and a temple of Minerva -- the latter being the oldest intact decor in the world, dating to 1754: "Our own Mona Lisa," said Masson.

The sets were highly innovative at the time, riding on rails from both sides of the stage to create moving backdrops -- the "special effects of the 18th century," said Masson. "A testimony to the virtuosity of the 18th century decorators."

The theatre was deemed worthless at the time of the revolution, and so never sold off. Yet restoring its former glory has been a job of painstaking conservation.

With visitors kept away by the pandemic, the team has been working on a new curtain, stitching the dazzling cobalt-blue linen together by hand using the original techniques.

They are also using the chateau's original inventory to rebuild other parts that have been lost over the years, including machinery that allows a tree to rise from a trapdoor. 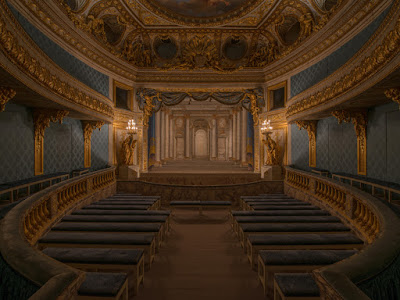 But even when visitors are able to return, the 250-seat theatre will not be giving regular performances.

Despite being brought back to functioning life with a major restoration in 2001, its fragility has meant it only gives concerts once every two years.

That makes those moments particularly special, said Masson: "We are always very moved to hear the notes rise from the pit."