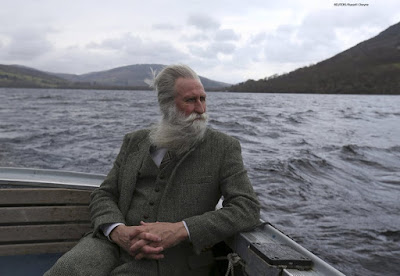 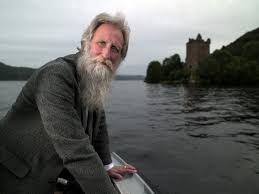 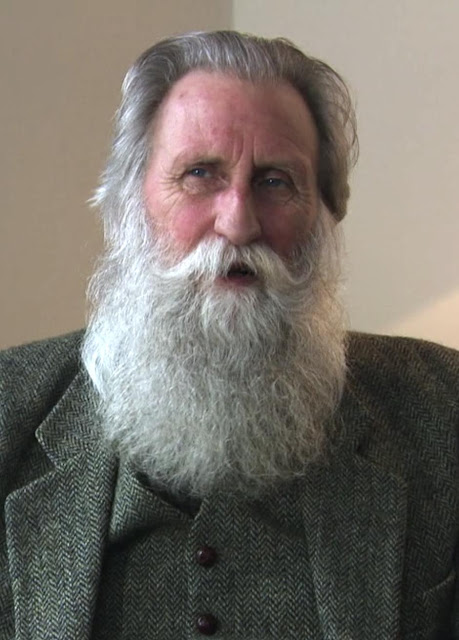 Loch Ness Monster Is Found! (Kind of. Not Really.)

After many decades of folklore and research, the Loch Ness monster has finally been found by an underwater drone.

O.K., it was just a movie prop version of the fabled sea serpent that sank to the bottom of the Scottish lake in 1969 discovered by researchers hunting for Nessie’s lair. But still, that’s also pretty cool.

Researchers found the 30-foot prop, made for the 1970 Billy Wilder film “The Private Life of Sherlock Holmes,” 180 meters down on the bed of the lake in April. It had sunk during production in 1969 and a new Nessie was created for the film, which starred Christopher Lee and Robert Stephens. 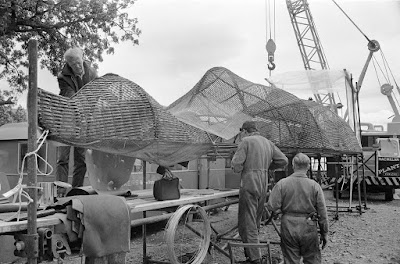 The framework of a model of the Loch Ness monster which was made for the film “The Private Life of Sherlock Holmes” in 1969.

It was not, to the disappointment of believers, the actual sea creature of legend that has attracted hordes of tourists to Scotland since its first sighting in 1933. Though its existence is largely considered to be a myth, over 1,000 people claim to have personally seen it, according to Adrian Shine, the lead researcher at the Loch Ness Project.

Researchers from Kongsberg Maritime sent the robot underwater to previously unreached territory in search of “Nessie’s Trench,” a crevice that a tour boat operator claimed to have found in January. Maybe, just maybe, that was the hide-out of the elusive sea serpent?

Nope. The marine drone, with its sonar-imaging technology that is otherwise used in searches for downed aircraft and ships, did not find an anomaly or abyss in the area thought to contain the trench, but it did happen upon the old movie prop.

The water has largely been searched with no sign of a dinosaurlike creature, but Mr. Shine said there’s always more work to be done. His research, named Operation Groundtruth, has pivoted from investigating the water to investigating the observer, studying human perception and whether we should believe what we see with our own eyes.

He doesn’t believe in the monster, he said. But he and many others remain fascinated by the question of what “1,000 sober and honest people” could be thinking or seeing when they claim to spot large animals in the water.

“It’s because we want it to be true,” Mr. Shine said. “All of us, even skeptics like me, I’m still trying to find out what people are seeing.”

Real or not, the legend has long been a tourist draw. VisitScotland, a tourism agency that supported the search project, said Nessie is worth about $85 million to the Scottish economy. It’s been that way for a long time.

“Some time ago it was estimated that a desire on the part of curious tourists to interview ‘the monster’ had put £5,000 into the pockets of thrifty tradesmen,” The New York Times reported in an earnest dispatch from 1933.

“The question is not whether some vast legendary creature, 500 feet long, is roaming over the high seas like the snakes that strangled Laocoön and his sons,” the report continued. “It is whether a species or more than one species of marine creature, say fifty feet in length, rare but actual, still inhabits the ocean.” 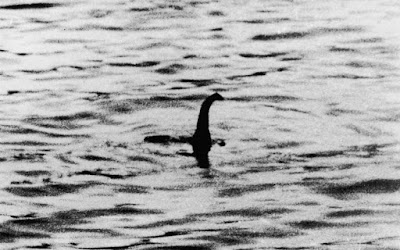 Surgeon's Photograph, captured by Robert Kenneth Wilson, is arguably the most famous photo of Nessie

Here we go again. A band of scientists teasingly announced that it had evidence to provide a "plausible theory" to explain the Loch Ness Monster, only to disappoint Nessie fans around the world. The team at New Zealand's University of Otago reckons that the monster is not a monster at all but instead a giant eel, one of several perhaps, having analysed DNA taken from water samples. That may be so, but the legend will never die, so here are 50 facts we have about Nessie...

1. Robert Kenneth Wilson, a London physician, captured arguably the most famous image of the Loch Ness Monster, the Surgeon’s Photograph (shown above). It was published in the Daily Mail on April 21, 1934.

2. Mr Wilson didn't want his name associated with the picture, which explains its nickname the "Surgeon's Photograph".

3. The Sunday Telegraph outed the Surgeon's Photograph as a fake on December 7, 1975.

4. Nessie – the Surgeon's Photograph Exposed, a 1999 book, explains that the hoax was accomplished using a toy submarine purchased from Woolworths and a fake head and neck. The model was sunk after being photographed, and is presumably still somewhere in the loch.

5. The earliest report of a monster in the vicinity of Loch Ness appears in the Life of St. Columba by Adomnán, an abbot of Iona, written in the 7th century.

6. Other sightings include one by Doctor D. Mackenzie of Balnain in the 1870s - he said he saw an object "wriggling and churning up the water".

7. It wasn't until 1933 that the Nessie myth really took off, following the opening of a new road that ran along the side of the loch. A sighting by George Spicer was reported on July 22, and then another by Arthur Grant, a motorcyclist, the following month.

8. The first photographic "evidence" of Nessie was captured by Hugh Grey on November 12, 1933. Critics claimed the blurry image shows Grey's labrador retriever swimming towards its owner with a stick in its mouth.

9. Loch Ness is the second largest loch by surface area and the largest by volume.

10. It is around 750 feet deep and holds more water than in all of the lakes and rivers of England and Wales combined.

11. There is one island on the loch - Cherry Island at Fort Augustus.

13. Loch Ness lies in the Great Glen Fault Line between Fort Augustus and Inverness which is the longest glen in Scotland.

16. There are around 200,000 searches for the Loch Ness Monster on Google each month.

17. Some believe the Loch Ness Monster is a plesiosaurus, a type of marine dinosaur which roamed the planet 205 million years ago.

18. Normal visibility under the water is no more than four inches. The dark colouring is caused by a high density of peat particles.

19. The Loch Ness Monster was named the most famous Scot in a 2006 survey.

20. There are approximately 40 small rivers, streams, burns and waterways running into the loch, including the Oich, Tarff, Enrich and Farigaig.

21. There are two layers of radioactive sediment beneath the waters of Loch Ness. The first was a result of the Chernobyl disaster.

23. Many people have attempted to create false images of Nessie - some have used bales of hay to recreate her humps, others have used a stuffed hippo foot to make a trail of fake prints.

24. On April 1, 1972, newspapers announced that Nessie was dead. It was part of an April Fools' Day prank organised by John Shields of Flamingo Park Zoo, who planted a dead seal in the loch.

25. Among the most recent hoaxes was by George Edwards, who skippers boat tours on the loch, in 2012. He used a fibreglass hump to create this image.

26. A circus owner once offered a reward of £20,000 to anyone that could bring him the monster alive.

27. The first organised search for Nessie was in 1934. Twenty men were each paid £2 a day to be monster watchers - but nothing was spotted.

28. The Thatcher government seriously considered an official Loch Ness Monster hunt. There was even talk of using dolphins from America to help look for it.

29. The largest search to date was in 1987, costing £1 million. The researchers used advanced sonar and camera technology to look for it. The only data gathered was three sonar contacts that showed a creature “larger than a shark but smaller than a whale”.

30. During heavy rainfall the loch's waterline has been known to rise by as much as seven feet. A rise of two feet is more common.

31. The Official Loch Ness Monster Fan Club is dedicated to the myth.

33. Toyota, Abercrombie and Fitch, Orange, Vodaphone, Ballygown Spring Water and Kit Kat have all used the loch in their adverts.

34. In 2009, a man claimed to have found the Loch Ness Monster on Google Earth. Apple Maps have also captured a shadowy shape near the lake's surface.

36. The loch never freezes due to a thermocline effect, meaning as the water in the highest 100 metres cools, it will sink and be replaced by the warmer water from the depths. This can make the loch steam on very cold days.

37. One hundred athletes in the Scottish Triathlon were each insured £1 million against bites from the Loch Ness Monster in 2005.

39. Dr Rines, who helped find the wreck of the Titanic, spent 37 years searching for Nessie before he died in 2009.

41. A great way to see the lake and look out for Nessie is to jump aboard a cruise or drive along the scenic A82 route.

42. In 1976, a group of people used bacon as bait in the hope of finding the Loch Ness Monster.

43. Scientist Adrian Shine has been looking for Nessie for over 30 years.

44. Locals have awarded some Nessie hunters an online diploma.

47. Explanations for Nessie sightings have included seals or possibly an overgrown eel. In 2013, Jeremy Wade, as part of the series River Monsters, suggested that the loch contains Greenland shark, which reach 20 feet in length and have no dorsal fin.

48. A Buddhist monk - Lama Yeshe Losal Rinpoche - moved to Scotland in 2012 to search for the monster.

49. A documentary team for Channel Five used Hollywood special effects to create an elaborate hoax in 2004. It sparked 600 sightings.

50. In 1960, Denys Tucker was fired from his job at the Natural History Museum for claiming to have seen the Loch Ness Monster.