Tailors adapt to popularity of casual wear and hotter climate 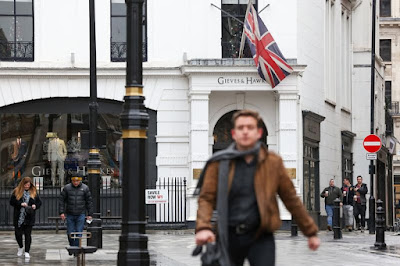 Savile Row’s 250-year-old tailor Gieves & Hawkes which is being sold.

When the governor of the Bank of England stood up to address 300 City bigwigs last month, there was a striking difference from previous Mansion House dinners -- no-one was wearing black-tie.

The historic relaxation of one of London’s stuffiest dress codes was a relief to many attendees after temperatures struck a record-breaking 40 degrees Celsius (104 degrees Fahrenheit) earlier in the day.

But heat waves and increasingly casual fashion habits pose a headache to one of the capital’s best-known industries on the other side of town: the tailors of Savile Row.

Savile Row has faced a tough time after stores closed during Covid following several years of rising rents, but the latest threats in its 200 years of history are perhaps more subtle and pervasive.

“The boundaries are blurred now” between the office and the outside world, said Nick Paget, senior editor at WGSN, a retail trends forecaster. “The very traditional pinstriped suit starts to feel like an anachronism.”

With many professionals working from home part time and offices relaxing dress codes to entice workers back, a freshly cut suit is losing its appeal. Record-breaking temperatures this summer have put added pressure on formal dress and wealthy Chinese buyers are not able to travel to the UK for their bespoke suits as Beijing persists with its strict zero-Covid policy.

The fundamentals are stark. In the last week of June footfall on Savile Row was more than 40% below the equivalent week in 2019, the second biggest decline among all the nearby roads including Regent Street and Oxford Street, according to New West End Company data seen by Bloomberg News.

Brits have cut spending on suits, increased on tracksuit bottoms

It takes several months to produce a bespoke two-piece Savile Row suit with an average of 60 man hours and multiple appointments for fittings. The average price is around £5,000.

Tailors on ‘The Row’ are trying to adapt to changing tastes, with many launching ready-to-wear ranges alongside their bespoke offerings. Online sales are becoming more important and tailors are also opting for lighter-weight fabrics to cope with unprecedented temperatures. 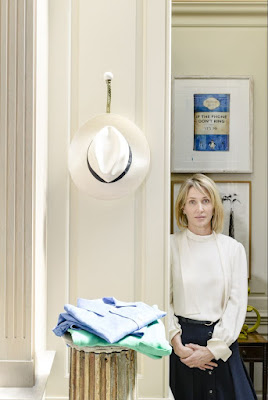 At Anderson & Sheppard, around the corner from Savile Row, customers are requesting jackets without the back lined for a more breezy feel and many are choosing linen. The 116-year-old company, whose clients include Daniel Craig and Tom Ford, is using colorful, lighter cloths to convince Brits to buy their summer wardrobes at home rather than shopping in France, Italy or the US, said its boss Anda Rowland.

It’s a similar story at Edward Sexton, the eponymous brand of the Savile Row doyen, with silk shirts “flying out the door”. The 79-year-old tailor, who dressed The Beatles on their Abbey Road album cover, Mick Jagger and Harry Styles to name a few, has brought out an unstructured jacket in an open-weave fabric in another nod to comfort.

Sexton, sitting in front of a vast mirror in a large fitting room, calls it “the smartest cardigan you’ll ever wear” with fabric “as soft as butter.” The company is also rebuilding its website to make it easier for customers to compare prices and work out their size from home.

Savile Row has come a long way since Sexton started out, when store fronts were obscured by heavy curtains and only opened by appointment with upper-class gentlemen. Still, the street cannot afford to stop reinventing itself to entice today’s shopper.

“Generally Savile Row by 5pm or 6pm, and also on weekends, is deathly quiet,” said Rowland, who as chair of the Savile Row Bespoke Association is pushing for improvements on the street. “If a young potential customer travels all the way from Seoul to come and see Savile Row, he should be able to have something lovely to drink and spend time in the area, and that’s not really the case today.”

The Pollen Estate, which owns most of Savile Row, is planning restaurant openings and new stores. Recent arrivals include Clothsurgeon, which makes bespoke streetwear including tracksuits and bomber jackets, and Savile Row’s first female-only tailor The Deck. US interiors chain Restoration Hardware is set to open its doors in the Abercrombie & Fitch Co. site. Edward Sexton is also returning to Savile Row with a permanent store.

“Our strategy is to enhance and cherish the best of the traditions of Savile Row but introduce new, exciting and sometimes different offers,” said Julian Stocks, CEO of the Pollen Estate.

The average price for a suit has dropped almost 75%

The suit isn’t only in decline on Savile Row. Retailers are selling them cheaper as demand falls. The average price for a suit has dropped almost 75% over the last two years to an average of around £200 in mid July, according to data from WGSN by Ascential tracking 62 retailers in the UK.

The Office for National Statistics removed the suit from its basket of goods used to calculate the annual inflation rate in March for the first time since 1947. It now tracks prices of formal jackets or blazers instead. Marks & Spencer Group Plc cut the number of stores selling suits last year to 110 out of its 254 large locations. The retailer highlighted “the relaxation of formalwear” when it unveiled a collection of smart-separates for the England men’s football team this week, avoiding the “structured suit, shirt and tie uniform.” 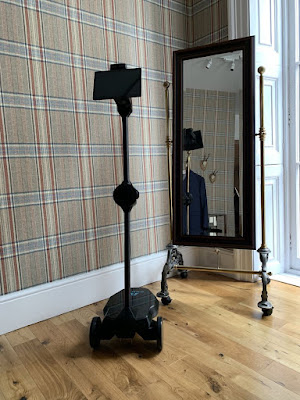 In a sign of distress among suitmakers, 250-year-old Savile Row tailor Gieves & Hawkes is being sold after its owner, Hong Kong-listed Trinity Ltd. was put into liquidation last year. British suitmaker T.M. Lewin entered into insolvency twice in recent years as the pandemic forced the 120-year-old company to become an online-only business. Kilgour, who dressed icons Cary Grant and Fred Astaire, closed its doors in 2020 after lockdown took hold.

Back on Savile Row, some of the tailors are turning to new technology to reach clients abroad. Huntsman, which was established in 1849 and served as the inspiration for the blockbuster Kingsman movie franchise, is managing to fit bespoke suits to customers in China and Hong Kong using a robot created in the depth of the pandemic.

Huntsman’s tailors use the robot -- essentially a camera, microphone, speaker and frame on wheels -- to remotely work alongside an assistant in another part of the world, when they are fitting a client. Huntsman has done 11 fittings in China this year and is fitting in Hong Kong every other week, said managing director Taj Phull.

Wherever clients are based, there remains an undeniable prestige to holding an address on The Row. “Savile Row is 100% a destination,” said Phull, sitting in Huntsman’s plaid-clad VIP Club Room across from two deer head busts above a fireplace.

Clothsurgeon founder Rav Matharu echoed the sentiment. It “had to be” Savile Row, he said, ahead of Clothsurgeon’s first store opening next week. The company, whose autumn winter 2021 collection was dubbed Rebel on the Row, is seeking younger, “different” customers with its more casual clothing.

“Everyone wants to be more convenient and more comfortable,” said Matharu, sitting at a consultation table where clients can discuss their look. “We are disruptive in a respectful way.”

The tailor’s arrival has attracted attention to wider efforts to give the street a make-over. With retail analysts warning that casual dress habits are here for the long run, and the West End still struggling to find its way post-pandemic, the need to adapt is more pressing than ever. If the City of London can change its pinstripes, so can Savile Row.

— With assistance by Jack Sidders

The Row has been in a process of adaptation since it's beginning. It does not sell style but unrivaled quality and individual service; as long as there are clients with the resources to pay for such then the present set of preferences present just one more challenge in a long line of many.