In DEFENSE of M&S Oxford Street 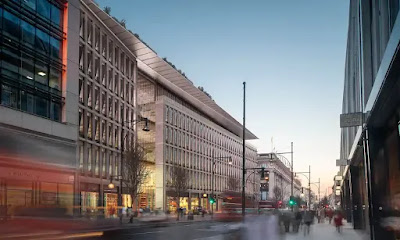 How the proposed M&S store on Oxford St might look. Photograph: Marks & Spencer 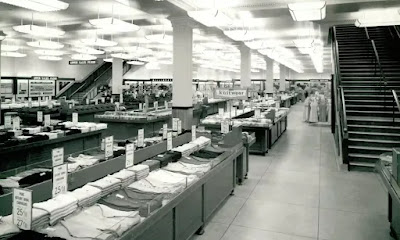 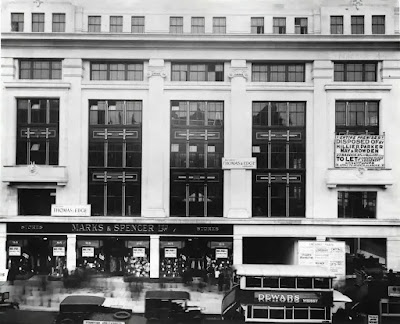 Not just any building: why plans for the M&S flagship store hit a raw nerve

Margaret Thatcher was effusive as she admired a £200 cashmere sweater. “That’s lovely. Now that is what I call an investment,” she remarked. The then prime minister was visiting Marks & Spencer’s newly extended store at Marble Arch in 1987 as shoppers readied for Christmas. Thatcher was flanked by Lord Rayner, the retailer’s chairman, as she spent almost two hours touring the store, meeting staff, greeting customers and choosing a few items.

More than three decades later, relations between the high street stalwart and the current Conservative regime are far less cordial, as a row over the same shop on London’s Oxford Street threatens to become a cause célèbre in the battle over the shape of redevelopments and the fate of Britain’s high streets.

This week Michael Gove, the secretary of state for levelling up, housing and communities, ordered a public inquiry into the plan to demolish and rebuild the flagship store on the most famous of Britain’s high streets.

Campaigners argue the project would release 40,000 tonnes of CO2 into the atmosphere, while M&S says that government intervention into its “significant investment in one of our most iconic shopping locations” could have “a chilling effect for regeneration programmes across the country”.

M&S has refurbished other stores – such as Cheltenham and Chelmsford – but says rejigging the existing Marble Arch shop, created over decades from a merger of three no longer suitable buildings, some of which contain asbestos, is not viable.

The retailer argues that any significant redevelopment of the existing building would involve creating additional carbon emissions without delivering as many benefits of its new building. Its planned development is set to use 25% less energy than the existing site – benefits its designers Pilbrow + Partners argue will last a century – with a maximum carbon payback of 17 years and potentially less than 10.

That argument won over Westminster council’s planning authorities, while the London mayor, Sadiq Khan, opted not to intervene over the M&S application, consideringit in line with the capital’s planning strategy.

With high streets around the country needing redevelopment to suit modern demands while the climate crisis intensifies, the debate over whether troubled buildings should be refurbished or redeveloped will only become more heated.

Will Hurst, the managing editor of the Architects’ Journal, which backed a letter calling on Gove to intervene in M&S’s Oxford Street plans, has been raising awareness of the carbon footprint of new-builds via its Retro First campaign. He says three-quarters of local authorities have now declared a climate emergency but “many of them haven’t got to grips when it comes to planning and development”.

He says more than a third of the lifetime emissions of a typical office block and more than half that of residential buildings are used up in construction, so for councils with such environmental concerns it will become “nonsensical to keep waving proposals through” on new-builds.

“People are starting to realise the impact of reuse on a huge scale, like construction, because they understand it on the small scale,” he says. “They are looking at buying secondhand clothes or realising they shouldn’t change their smartphone every six months.”

Nicholas Boys Smith, the director of the thinktank Create Streets, says: “Clearly the expectation of the public and the political process is moving. Change is on the way without a shadow of a doubt.”

With carbon concerns rising up the agenda, he says there will be “some inconsistency” in decision making and some councils and developers will be caught out.

The M&S plans may have attracted national attention, but similar projects nearby, such as the demolition and redevelopment of a House of Fraser store in Victoria, have seemingly been waved through without much drama.

An entire town centre is scheduled to be hit by the wrecking ball in Cumbernauld in Scotland, as is a former Debenhams in Torquay, Devon, while there are battles over plans to knock down a Debenhams in Taunton. An application to raze another in Harrogate has recently been withdrawn.

On Oxford Street alone, some stores have already been demolished and rebuilt. However, the former Debenhams, House of Fraser, Next and Topshop stores are all being refitted rather than razed.

Outside London, there are numerous examples of building rejigs including the Jenners building in Edinburgh and the Hammonds of Hull food hall which was created within a former House of Fraser.

Melanie Leech, the chief executive of the British Property Federation, says developers are “already embracing the circular economy and responding to the market demand for more sustainable buildings”. She called on the government to do more to accelerate progress including planning reforms to prioritise the reuse of buildings and a VAT exemption for refurbishment works.

In Westminster, there may yet be a change of tack on M&S’s project after the Conservative administration was pushed out by Labour in recent council elections for the first time since its creation in 1964.

Geoff Barraclough, a councillor responsible for planning, said: “The council is serious about reducing the environmental impact of new development by emphasising the benefits of retrofitting over demolition.”

He welcomed Gove’s intervention, saying “all the issues raised by this case can be rigorously tested”.

Henrietta Billings, the director of Save Britain’s Heritage, adds: “There are plenty of examples where you can, with a bit of imagination, revise existing buildings without having to knock them down.

“We have got to get to a point where demolishing buildings unnecessarily is unacceptable because of the environmental costs – where [demolition] is the last resort rather than the first resort.” 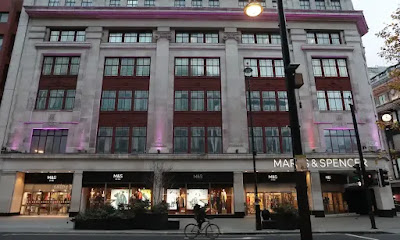 The author Bill Bryson and architects including the Stirling prize winner Steve Tompkins and Mark Hines, the project director for the remodelling of BBC Broadcasting House, have lined up to oppose plans to flatten Marks & Spencer’s store on London’s Oxford Street.

Bryson, who is best known for Notes from a Small Island and A Short History of Nearly Everything, has donated £500 to a fighting fund established by the campaign group Save Britain’s Heritage in the run-up to a public inquiry into the plan – under which M&S wants to build a new store and offices on the same site – ordered by the former communities secretary Michael Gove in June.

The scheme has become a poster child for the debate over a shift to retrofitting and refurbishing buildings rather than demolition and rebuilding, as part of efforts to cut the carbon footprint of development amid the climate crisis.

A report produced by the architect and net zero expert Simon Sturgis commissioned by Save argued that the M&S proposals were not compliant with the government’s net zero commitments or the Greater London Authority’s policy to prioritise retrofit.

However, M&S says its proposed new building would use less than a quarter of the energy of today’s structure, and the fabric of the existing site, known as the Arch, which is made up of three buildings of different ages with asbestos throughout, means that refurbishment is not a realistic option.

M&S looks likely to face considerable opposition to its plans as the crowdfunder, to cover Save’s legal costs in opposing M&S at the inquiry, which kicks off on 25 October, has a target of £20,000 and is approaching the halfway mark.

Bryson, who announced his retirement in 2020, told the Architects’ Journal, which first reported his involvement in the campaign: “I believe it would be a great shame to tear down the M&S building. I have no special knowledge or insights about the matter. I just wish to help stop a bit of foolishness.”

Tompkins, a co-founder of Architects Declare who led the recent redesign of the National Theatre in London, wrote in his letter opposing the scheme: “Number 458 Oxford Street is a handsome piece of urban architecture, made with high-quality durable materials. It is a successful component of the wider streetscape and a familiar London landmark. For these reasons, the building appears to be an entirely suitable candidate for deep retrofitting.”

The list of opponents also includes Ian Ritchie Architects, which worked on the Louvre’s pyramid extension, and the sustainable design specialist Sarah Wigglesworth, as well as the Conservative MP Duncan Baker – who introduced a private member’s bill on embodied carbon earlier in the Commons earlier this year.

Wigglesworth said in her letter that demolishing and rebuilding the store would be a “climate crime” amid a planetary emergency “the like of which we have never experienced before”.

The demolition and replacement scheme led by the architecture firm Pilbrow & Partners, which would release almost 40,000 tonnes of carbon into the atmosphere, was approved by Westminster city council and the Greater London Authority led by the mayor, Sadiq Khan, but was then called in by Gove.