Travelers want to be comfortable and practical but overly casual dressing at the airport might not be the ticket. 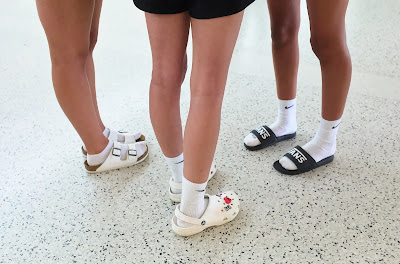 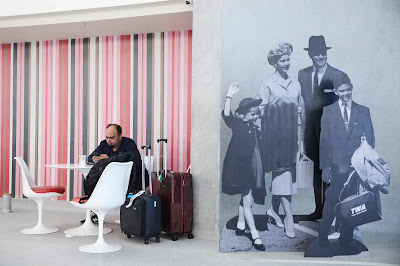 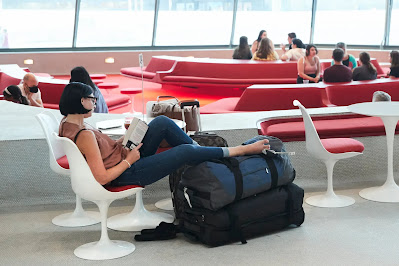 Travelers want to be comfortable and practical but overly casual dressing at the airport might not be the ticket.

Flying home from Paris recently, I suddenly had the creepy sensation of something hovering over my shoulder. Looking toward the aisle I spied nothing. Swiveling my head to the left, I saw what it was. The woman in the row behind me had somehow wedged her toes into the seat crevice alongside my ear.

The eye has to travel, as the famous Diana Vreeland epigram had it, and logically where the eye goes, the body follows. The question one would put to fellow travelers is this: Would it really be too much to ask you to wear shoes?

Travelers, as we are constantly being reminded, are returning to the skies in droves, a welcome release from those pandemic years we spent peering through the prison bars of Zoom and dreaming of far-off destinations — or any place that wasn’t a bedroom passing itself off as an office cubicle.

Is it possible, though, that all the time spent trapped in our skivvies accelerated what was already a concerning breakdown of distinctions between what constitutes public space and private? Sure, it has been a while since fuzzy slippers were normalized as streetwear and pajama bottoms became cool for the mall.

Yet somehow along the way the traditional sense that embarking on a journey is both a privilege and a potentially special event got mislaid. Nowadays the arrivals and departure halls at major airports look little different from a locker room.

“Airline travel used to be glamorous,” said Valerie Steele, the director of the museum at the Fashion Institute of Technology, referring to a putatively more civilized era than our own, when women wore a hat and gloves to fly and men spiffed up in coat and tie. Now, of course, air travel has devolved into a pitched struggle for extra legroom, overhead compartment space, early boarding privileges or a packet of salted snacks.

Even before experts like Peter Kern, the chief executive officer of the Expedia Group, predicted at the Bloomberg Technology Summit in San Francisco that this summer would be “the busiest travel season ever,” many had resigned themselves to air travel robbed of its former luster, to the sense that airlines see passengers as little more than human-shaped bundles of luggage. (Never mind that inflation and high gas prices have made the tariffs for a flight across country feel as pricey as a six-month cruise. )

Still, while the experience of travel may seem demeaning — hourslong lines for check-in, security and baggage at facilities like Delta’s Terminal 4 at Kennedy International Airport, a bare-bones cavern where the sole place to sit is on the floor — is that a good reason to meet insult with insult and dress accordingly? As someone once doomed to spend a night in the Minneapolis airport, I can attest that denim is a more practical option than PJ’s when you are bedded down behind a flight information board.

Yes, her grooming was immaculate, right down to the pearlescent French manicure with its coffin tips. What threw off at least one confounded observer, though, was her choice to take to the skies in a belted velour bathrobe and a pair of rubber shower shoes.

“There’s this need for comfort in all kinds of settings,” said Josh Peskowitz, a men’s wear designer and pundit. “I’m not saying we should go back to ‘jacket required,’ but I’m still not ready for people in straight-up Mark Zuckerberg-style pajama pants boarding a plane.”

Blame the athleisure trend and those who foisted it on an unready public, said Heather Shimokawa, a brand consultant and former vice president for fashion direction at Bloomingdale’s. It was fashion editors and stylists who first promoted this now ubiquitous hybrid of sportswear and intimate apparel but then left unwitting consumers to interpret the results for themselves.

“There is a lot of space for an editorial vision of what comfort dressing actually means,” Ms. Shimokawa said. “Casual does not mean slovenly. Your comfort should not equate with my gross-out.”

The issue, by no means limited to travel, arises in part when strangers wear stuff that forces us into a visual relationship with body parts we’d rather not think about. “If you say anything, you quickly run into a very aggressively enforced form of body positivity,” Ms. Steele said. “It becomes a matter of rights. It is my absolute right to wear whatever I want, and you have no right whatsoever to tell me what is appropriate.”

And yet why not? Perhaps, said Bonnie Morrison, a fashion brand consultant in New York, it is because the social contract “has been shredded.”

Some of it is a pushback on manners and etiquette “used as tools of oppression, Ms. Morrison added. “Yet, as the daughter of a man born under Jim Crow who saw manners as an expression of self-respect, I also look at propriety and etiquette as a way to show the respect for others you hope that they’ll return.”

Is it inherently disrespectful to board a crowded aluminum tube in which one will be confined for hours wearing comfortable shorts, leggings or sweats? Plainly, many think not. What, then, about open-toe shoes or sandals or Crocs?

“I draw the line at bare feet,” said Pelayo Diaz, a fashionable Spanish digital strategist with a million Instagram followers. “Dress nicely, if not for yourself then for the rest of us,” Mr. Diaz wrote in a direct message. “At the very least wear socks. After all, we’re the ones that have to look at you.”

What presents little more than a transitory nuisance for most can amount to an occupational hazard for airborne professionals. While most airlines have dress guidelines, these vary between carriers and are well nigh unenforceable during peak travel periods.

“I do the boarding door, and we have people who come on barefoot,” a Delta flight attendant said last week at J.F.K. “I’m sure they have shoes somewhere.” (The flight attendant declined to give her name, citing corporate policy that requires employees to seek permission to speak to reporters.)

As if to prove her point, the terminal was jampacked with ill-shod travelers whose overall garb suggested they were headed out for a beach day or to Everest base camp. True, there were a few travelers spotted over the course of a long afternoon attired in long pants, buttoned shirts and even blazers. Some wore formal suits and hats. Those in button-downs, as it happened, were Italian; the suited, observant Orthodox Jewish men.

“Africans dress up for travel, and Europeans,” said the flight attendant, who sometimes greets passengers in French. “They always ask, ‘How did you know?’ And I say, ‘Because you’re well dressed.’”

Forgoing a sports jacket or an easy summer shift in favor of jammies is misguided, the designer Billy Reid said recently, from his home in Florence, Ala. Why treat travel as a chore when you can use dress to celebrate an experience only a small fraction of the overall population is privileged to enjoy?

There is another thing to consider when deciding whether to shine up for the road, Mr. Reid said.

“I always remind my college-age children that the stranger you encounter on a flight may just be your future boss.”

A version of this article appears in print on Aug. 4, 2022, Section D, Page 5 of the New York edition with the headline: Endless Lines, Baffling Delays, Crocs for Days. Order Reprints | Today’s Paper | Subscribe