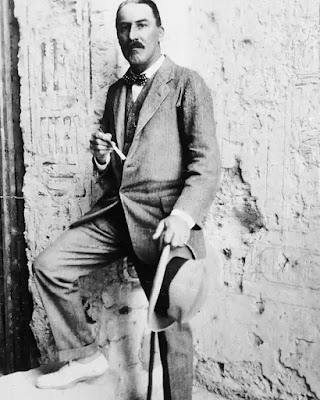 100 years after the discovery of the tomb of the boy king, a previously unpublished letter backs up long-held suspicions

The new evidence about the discovery of the golden coffin came from a member of Carter’s own team.

Howard Carter, the archaeologist who discovered Tutankhamun’s tomb in 1922, was long suspected by Egyptians of having helped himself to treasures before the vault was officially opened. But while rumours have swirled for generations, proof has been hard to come by.

Now an accusation that Carter handled property “undoubtedly stolen from the tomb” has emerged in a previously unpublished letter sent to him in 1934 by an eminent British scholar within his own excavation team.

It was written by Sir Alan Gardiner, a leading philologist. Carter had enlisted Gardiner to translate hieroglyphs found in the 3,300-year-old tomb, and later gave him a “whm amulet”, used for offerings to the dead, assuring him that it had not come from the tomb.

Gardiner showed the amulet to Rex Engelbach, the then British director of the Egyptian Museum in Cairo, and was dismayed to be told that it had indeed come from the tomb as it matched other examples – all made from the same mould.

Firing off a letter to Carter, he enclosed Engelbach’s damning verdict, which reads: “The whm amulet you showed me has been undoubtedly stolen from the tomb of Tutankhamun.”

Gardiner told Carter: “I deeply regret having been placed in so awkward a position.”

But he added: “I naturally did not tell Engelbach that I obtained the amulet from you.”

The letters, now in a private collection, will be published in a forthcoming book from Oxford University Press, Tutankhamun and the Tomb that Changed the World

Its author, Bob Brier, a leading Egyptologist at Long Island University, told the Observer that suspicions about Carter helping himself to treasures have long been rumoured: “But now there’s no doubt about it.”

This year marks the 100th anniversary of the discovery by Carter and his financial backer, Lord Carnarvon, of the tomb of the boy king, filled with thrones, chariots and thousands of objects needed in the next world. Over the next decade, Carter supervised their removal and transportation down the Nile to Cairo to be displayed in the Egyptian Museum.

Some Egyptologists have challenged Carter’s claim that the tomb’s treasures had been looted in antique times. In 1947, in an obscure scientific journal in Cairo, Alfred Lucas, one of Carter’s employees, reported that Carter secretly broke open the door to the burial chamber himself, before appearing to reseal it and cover the opening.

Brier said: “They were suspected of having broken into the tomb before its official opening, taking out artefacts, including jewellery, sold after their respective deaths. It’s been known that Carter somehow had items, and people have suspected that he might have helped himself, but these letters are dead proof.

“He certainly never admitted it. We don’t have any official denial. But he was locked out of the tomb for a while by the Egyptian government. There was a lot of bad feeling, and they thought he was stealing things.”

In his book, he writes that the Egyptians were unable to prove their suspicions and were convinced, for example, that Carter had been planning to steal a wooden head of Tutankhamun found in his possession: “The Egyptian authorities had entered and inspected Tomb No. 4, which Carter and the team had used for storage of antiquities, and discovered a beautiful lifesize wooden head of Tutankhamun as a youth.

“It had been packed in a Fortnum & Mason crate but it had never been mentioned in Carter’s records of the finds, nor in the volume describing the contents of the antechamber…. Carter argued that it had simply been discovered in the rubble in the descending passage.”

Brier said: “Later, we do find objects on the Egyptian antiquities market from his estate that clearly came from the tomb.”

Some entered museums, including the Metropolitan Museum of Art in New York, which announced in 2010 that it would send back to Egypt 19 objects it acquired between the 1920s and 1940s as they “can be attributed with certainty to Tutankhamun’s tomb”.

In his 1992 book on Carter, the late Harry James drew on Carter letters in the Griffith Institute at the University of Oxford, which refer to a row with Gardiner that led to an amulet’s return to Cairo.

The significance of the previously unpublished correspondence is that the accusation came from a leading expert who was actually involved in the first excavation.

Carter would have struggled to challenge Engelbach, who had “too much authority and really knew his stuff”, Brier said.


Tutankhamun and the Tomb that Changed the World by Bob Brier

It is often thought that the story of Tutankhamun ended when the thousands of dazzling items discovered by Howard Carter and Lord Carnarvon were transported to the Egyptian Museum in Cairo and put on display. But there is far more to the boy-king's story. Tutankhamun and the Tomb that Changed the World explores the 100 years of research on Tutankhamun that have taken place since the tomb's discovery, from the several objects in the tomb made of meteoritic iron that came from outer space to new evidence that shows that Tutankhamun may actually have been a warrior who went into battle. Author Bob Brier also takes readers behind the scenes of the recent CT-scans of Tutankhamun's mummy to reveal more secrets of the young pharaoh.

The book also illustrates the wide-ranging impact the discovery of Tutankhamun's tomb had on fields beyond Egyptology. Brier examines how the discovery of the tomb influenced Egyptian politics and contributed to the downfall of colonialism in Egypt. Outside Egypt, the modern blockbuster exhibitions that raise great sums of monies for museums around the world all began with Tutankhamun, as did the idea of documenting every object discovered in place before it was moved. And to a great extent, the modern fascination with ancient Egypt DL Egyptomania DL was also greatly promoted by the Tutmania that surrounded the discovery of the tomb. Deeply informed by the latest research and presented in vivid detail, Tutankhamun and the Tomb that Changed the World is a compelling introduction to the world's greatest archaeological discovery.