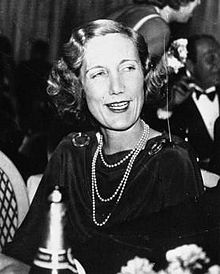 Markham was born Beryl Clutterbuck in the village of Ashwell, in the county of Rutland, England, the daughter of Charles Baldwin Clutterbuck and Clara Agnes (Alexander) Clutterbuck (1878–1952). She had an older brother, Richard Alexander Clutterbuck (1900–1942). When she was four years old, her father moved the family to Kenya, which was then British East Africa, purchasing a farm in Njoro near the Great Rift Valley. Although her mother disliked the isolation and promptly returned to England, Beryl stayed in Kenya with her father, where she spent an adventurous childhood learning, playing and hunting with the natives. On her family's farm, she developed a knowledge of, and love for horses. As a young adult, she became the first licensed female horse trainer in Kenya. Impetuous, single-minded and beautiful, Markham was a noted non-conformist, even in a colony known for its colourful eccentrics. She was married three times. She also had an unconcealed 1929 affair with the Duke of Gloucester, the son of George V. The Windsors promptly cut the romance short; Hubert Broad had an affair with Beryl and he was named as the accomplice in the divorce by Mansfield Markham. After her Atlantic crossing, she returned to be with Broad. He was also a great influence in her flying career.
She befriended the Danish writer Karen Blixen during the years that Blixen was managing her family's coffee farm in the Ngong hills outside Nairobi. (In the film rendering of Blixen's memoir, Out of Africa, Markham is represented by an outspoken, horse-riding tomboy named Felicity.) When Blixen's romantic connection with the hunter and pilot Denys Finch Hatton was winding down, Markham started an affair with him herself. He invited her to tour game lands on what turned out to be his fatal flight, but Markham declined because of a premonition from her flight instructor, Tom Campbell Black. Sara Wheeler, in her biography of Finch Hatton, notes that she believes stories that Markham was pregnant by him at the time of his crash.
Largely inspired by the British pilot Tom Campbell Black, with whom she had a long-term affair, she took up flying. She worked for some time as a bush pilot, spotting game animals from the air and signaling their locations to safaris on the ground. She also mingled with the notorious Happy Valley set. 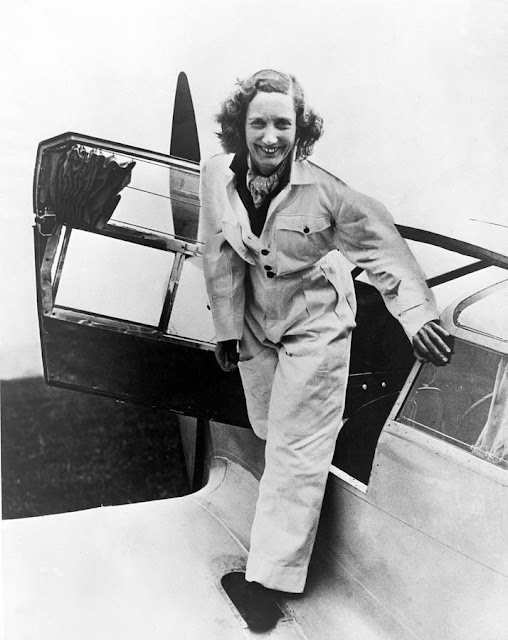 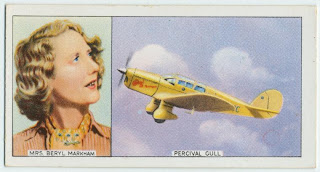 Markham is often wrongly described as "the first person" to fly the Atlantic east to west in a solo non-stop flight, but that record belongs to Scottish pilot Jim Mollison, who attempted to fly from Dublin, Ireland, to New York City in 1932. Low visibility forced Mollison down in New Brunswick, Canada, but he was still able to claim the Atlantic east-to-west record (a westbound flight requires more endurance, fuel, and time than the eastward journey, because the craft must travel against the prevailing Atlantic winds). Markham was however, the first woman to complete this feat.
When Markham decided to take on the Atlantic crossing, no pilot had yet flown non-stop from Europe to New York, and no woman had made the westward flight solo, though several had died trying. Markham hoped to claim both records. On September 4, 1936, she took off from Abingdon, England. After a 20-hour flight, her Vega Gull, The Messenger, suffered fuel starvation due to icing of the fuel tank vents, and she crash-landed at Baleine Cove on Cape Breton Island, Nova Scotia, Canada (her flight was, in all likelihood, almost identical in length to Mollison's). In spite of falling short of her goal, Markham had become the first woman to cross the Atlantic east-to-west solo, and the first person to make it from England to North America non-stop from east to west. She was celebrated as an aviation pioneer.
Markham chronicled her many adventures in her memoir, West with the Night, published in 1942. Despite strong reviews in the press, the book sold modestly, and then quickly went out of print. After living for many years in the United States, Markham moved back to Kenya in 1952, becoming for a time the most successful horse trainer in the country. 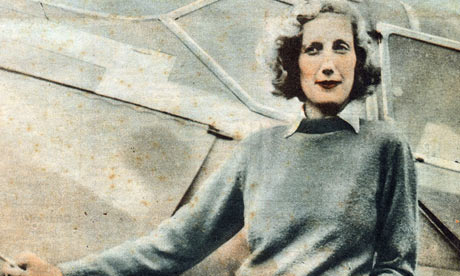 Markham's memoir lingered in obscurity until 1982, when California restaurateur George Gutekunst read a collection of Ernest Hemingway's letters, including one in which Hemingway lavishly praised Markham's writing (and attacked her character):
“          "Did you read Beryl Markham's book, West With The Night? ...She has written so well, and marvellously well, that I was completely ashamed of myself as a writer. I felt that I was simply a carpenter with words, picking up whatever was furnished on the job and nailing them together and sometimes making an okay pig pen. But this girl, who is to my knowledge very unpleasant and we might even say a high-grade bitch, can write rings around all of us who consider ourselves as writers ... it really is a bloody wonderful book."           ”
Intrigued, Gutekunst read West with the Night and became so enamored of Markham's prose that he helped persuade a California publisher, North Point Press, to re-issue the book in 1983. The re-release of the book launched a remarkable final chapter in the life of the eighty-year-old Markham, who was lauded for her three final years as a great author as well as flyer. When found in Kenya by AP East Africa correspondent Barry Shlachter, Markham was living in poverty, and had been badly beaten in a burglary at her house near the Nairobi racetrack, where she still trained thoroughbreds. The re-publishing of West with the Night provided enough income for her to finish her life in relative comfort. Earlier, she had been supported by a circle of friends and owners of race horses she trained into her 80s. The book became a surprising bestseller, spurred by the 1986 broadcast of a public television documentary about Markham's life, World Without Walls: Beryl Markham's African Memoir, produced by Gutekunst, Shlachter, Joan Saffa, Stephen Talbot and Judy Flannery in collaboration with KQED-TV in San Francisco. Gutekunst and Shlachter had approached the station to cooperate on the documentary, directed by Andrew Maxwell-Hyslop. British actress Diana Quick was the voice of Markham in readings from her memoir, Shlachter conducted the interviews, which CNN Africa correspondent Gary Streiker filmed for the well-reviewed, award-winning PBS program.
Markham died in Nairobi in 1986. Her short stories were posthumously collected in The Splendid Outcast, with an introduction by Mary S. Lovell. A tale from West With The Night 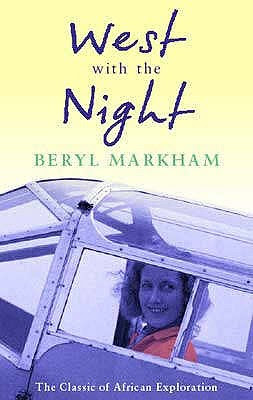 Questions were raised over time as to whether Markham was the real, or sole, author of West with the Night, not least because Markham never repeated her accomplishment with a second book of similar length, scope or beauty. The writing style has been linked with various writings by a contemporary writer of the time, Thomas Baker, who was also rumored to be her lover. Her publishing accomplishments for the rest of her life were limited to a handful of short stories.
According to the 1993 biography, The Lives of Beryl Markham, by Errol Trzebinski, the book's real author was her third husband, the ghost writer and journalist Raoul Schumacher. Trzebinski also claimed that Beryl Markham had an advance from Houghton Mifflin to do a book on the famous international jockey Tod Sloan, which Raoul Schumacher was supposed to write. Apparently Schumacher never did, and she was forced to go it alone, resulting in a manuscript submission that the publisher rejected as worthless, and not from the same person who had written West with the Night. Trzebinski had earlier taken the opposite view when interviewed by Shlachter for the PBS documentary, insisting on camera that only a woman could have written the memoir.
In her biography of Markham, Straight On Till Morning, author Mary S. Lovell, who visited Markham in Nairobi and interviewed her extensively shortly before Markham's death, disputes the claim that Schumacher made substantive contributions to West with the Night. From her research, Lovell concluded that Markham was the sole author, although Schumacher did edit the manuscript; instead, Lovell credits Antoine de Saint Exupéry, another of Markham's lovers, with being the inspiration behind Markham's clear, elegant language and storytelling style.
The International Astronomical Union has named the impact crater Markham on the planet Venus after her. 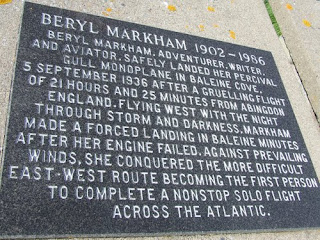