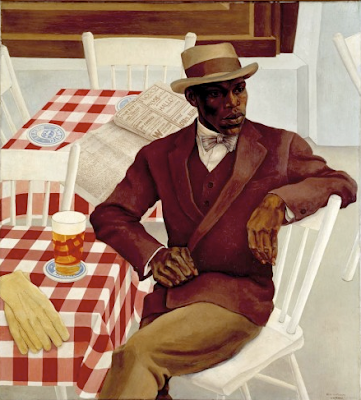 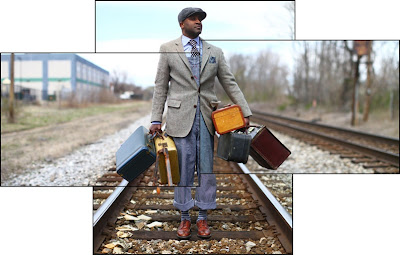 “A negro-boy . . . in a grey searge suit, his hair cut close to his head, was lost on Tuesday last, August 9th . . .” These lines from a 17th-century British advertisement for a runaway servant casually illustrate the absolute power slave owners wielded over those they held in bondage. In Slaves to Fashion: Black Dandyism and the Styling of Black Diasporic Identity, scholar Monica Miller points to the ad as among the first documented evidence of “luxury slaves,” black men and boys whose expensive attire reflected the prestige of their owners. Outfitted as pets for the rich and powerful, some of these men were able to rework and inhabit their clothes so brilliantly that their style and wit, if not their humanity, became undeniable.
The genius black people have shown for improvising to survive is the subject of Dandy Lion: Articulating a Re(de)fined Black Masculine Identity, a traveling exhibit of photographs and videos now on display at the Reginald F. Lewis Museum of Maryland African American History and Culture. Assembled by guest curator Shantrelle P. Lewis (no relation to the museum’s namesake), Dandy Lion features images of nattily attired men from Harlem, Haiti, London, and other cities within the African diaspora, as well as the continent itself.
Lewis, director of programs and exhibitions at the Caribbean Cultural Center African Diaspora Institute in New York, says the show began as a side project. After opening at a temporary “pop-up” art space in Harlem in 2010, Dandy Lion moved to Brooklyn; Newark, N.J., late last year; then Baltimore, gaining fans and more photographs along the way. In the show’s title, the wall text, and interviews, Lewis has been explicit about the social mission that drives the exhibit. Dandy Lion is her well-dressed assault on the army of stereotypes (e.g. the gun-wielding, foul-mouthed thug) that bombards black men in the United States and abroad.
Indeed, despite the finesse with which these men are outfitted, the subjects are often every bit as fierce as their more notorious counterparts in popular culture. The opening image in the local installation is Hanif Abdur-Rahim’s “A Revolution in Etiquette—Connoisseurs of SWAG,” which features four young men positioned in a quasi-military formation. The leader of the pack stands bespectacled, arms straight at his side in a double-breasted suit, daring you to mention that one button is undone. To his left, his second-in-command has turned the brim of his fedora up. You can’t miss the look in his eyes. The message is clear: You are not in control here. They are watching you. And they’ve intentionally brought a different attitude and touch to a style that has existed for more than 200 years.
The dandy aesthetic dates to 18th-century England, where it became popular among white men who used style to demand the type of respect that their pedigree could not. Fast-forward to the 21st century, and Dandy Lion shows modern black men using fashion as their own protest statement. Tropical-colored pocket squares erupt from dark suits. Kilts leave room for tasseled, calf-high socks. Occasionally the clothes are understated; the flourish lies instead in a pose or facial expression. These men insist on being seen.
Dandy Lion is lush, well researched, and engrossing. I wondered, however, if it fails on its own terms. What’s radical about showcasing men, some of whose ancestors were subjugated, adopting the style of their former captors? “As a people we are living on borrowed terms,” Lewis explained in a phone interview. “Foreign language, foreign clothes—how do you function and move about in that space? You appropriate. You use whatever tools are present. You take your own sensibility, merge those, and create something new.”
And it’s not just about the clothes. The exhibition frames black dandyism as a thoughtful, mannered response to displacement and some of the harsh realities of modern urban life. Lewis says she knows a number of the men in the exhibit personally and asked the photographers to consider the subjects’ characters and reputations before asking them to pose. Scanning the room, it’s as if these men on different continents are engaged in a dialogue about who they are, a conversation that has crossed oceans, language barriers, and time.
The timing of the show is propitious, following not long after a New York Times profile of Street Etiquette, a popular web site devoted to black style, and Wall Street Journal coverage of the Sapeurs, Congolese men whose vibrant clothes color a backdrop darkened by war. Dandy Lion filled a hole in the Lewis Museum’s schedule left by the canceled tour of an exhibit on Africa’s impact on art and design around the world called The Global Africa Project. Select images from Global Africa, including Nigerian-born artist Iké Udé’s mischievous “Sartorial Anarchy” series, lead the way into Dandy Lion. And the museum hung the show a little earlier than planned to coincide with the closing celebration of the Black Male Identity Project, a local effort with some of the same stereotype-defying goals. (Disclosure: I was a volunteer advisor for BMI.)
Lewis says the Baltimore installation is the project’s best yet. One of its most striking features is a 12-foot-tall paper reproduction of a statuesque model with a small afro and a full beard, deep in thought, glued directly onto the exhibition’s north wall. “Seeing an iconic image of a black man in such a positive light,” Lewis says, “the sheer physical size of it, the sociopolitical statement being made by having that kind of black man on such a grand scale, was huge.” She’s right. It’s monumental. But for some, just seeing people they can relate to treated with respect will leave an even bigger impression. 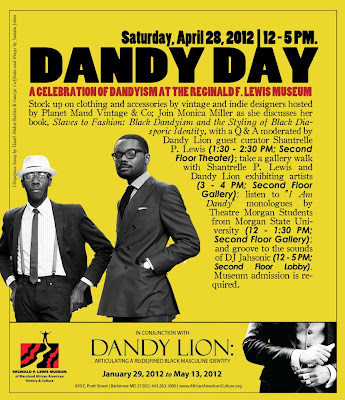 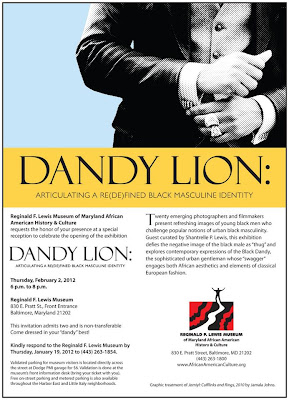 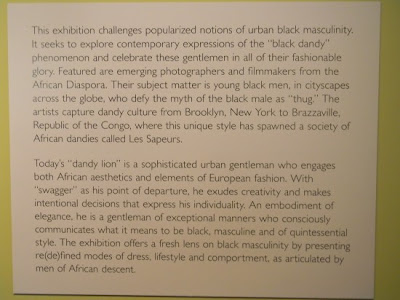 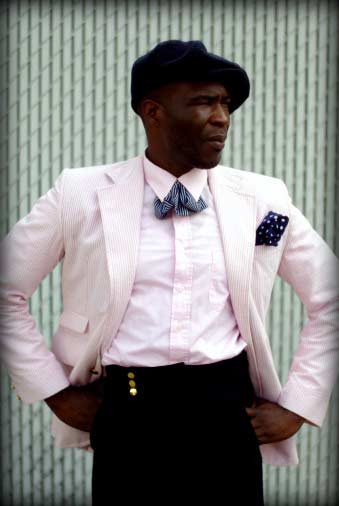