Creator of the “Gipson”/ “thumb” Sound, was one of the greatest guitar players of all times.
I also don't agree at all with the critics that accused him of becoming commercial/ Pop in his Creed Taylor years .
I think that Creed Taylor and Don Sebesky (arranger) achievements were sophisticated and… Superb !!
Yours Jeeves. - Known for developing the guitar technique of playing in octaves while soloing.

- Returned to Indianapolis to be with his family, including his brothers Monk Montgomery (bass) and Buddy Montgomery (vibes) who together recorded for the Pacific Jazz Label.

- Signed to Riverside in 1959. Released a series of highly acclaimed, small-group recordings in the traditional jazz/bebop style of the day,

- November 1964, released the first of ten albums on the Verve Label (including 2 with organist Jimmy Smith)

- Began to crossover into pop/jazz style, where he prospered and gained recognition outside of jazz.

- Moved to the A&M Records and recorded 3 albums, consisting mainly of popular songs of the day.

- 1969: Won second Grammy, again for “Best Instrumental Jazz Performance"
At his height of popularity Wes died of a heart attack on June 15th, 1968, leaving an unprecedented legacy as one of the great jazz innovators and improvisors. 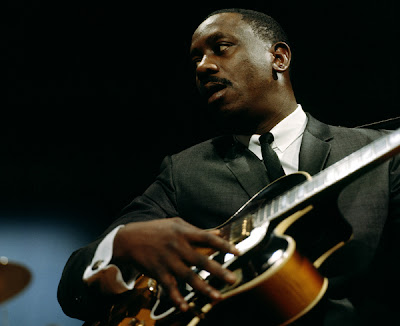 According to jazz guitar educator Wolf Marshall, Montgomery often approached solos in a three-tiered manner: He would begin a repeating progression with single note lines, derived from scales or modes; after a fitting number of sequences, he would play octaves for a few more sequences, finally culminating with block chords. He used mostly superimposed triads and arpeggios as the main source for his soloing ideas and sounds.

The use of octaves (playing the same note on two strings one octave apart) for which he is widely known, became known as "the Naptown Sound". Montgomery was also an excellent "single-line" or "single-note" player, and was very influential in the use of block chords in his solos. His playing on the jazz standard "Lover Man" is an example of his single-note, octave- and block-chord soloing. ("Lover Man" appears on the Fantasy album The Montgomery Brothers.)
Instead of using a guitar pick, Montgomery plucked the strings with the fleshy part of his thumb, using downstrokes for single notes and a combination of upstrokes and downstrokes for chords and octaves. Montgomery developed this technique not for technical reasons but for his wife. He worked long hours as a machinist before his career began and practiced late at night while his wife was sleeping. He played with his thumb so that his playing would be softer and not wake her. This technique enabled him to get a mellow, expressive tone from his guitar George Benson, in the liner notes of the Ultimate Wes Montgomery album, wrote, "Wes had a corn on his thumb, which gave his sound that point. He would get one sound for the soft parts, and then that point by using the corn. That's why no one will ever match Wes. And his thumb was double-jointed. He could bend it all the way back to touch his wrist, which he would do to shock people."
He generally played a Gibson L-5CES guitar. In his later years he played one of two guitars that Gibson custom made for him. In his early years, Montgomery had a tube amp, often a Fender. In his later years, he played a solid state Standel amp with a 15-inch (380 mm) speaker 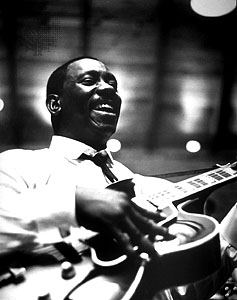 Montgomery toured with vibraphonist Lionel Hampton's orchestra from July 1948 to January 1950, and can be heard on recordings from this period. Montgomery then returned to Indianapolis and did not record again until December 1957 (save for one session in 1955), when he took part in a session that included his brothers Monk and Buddy, as well as trumpeter Freddie Hubbard, who made his recording debut with Montgomery. Most of the recordings made by Montgomery and his brothers from 1957–1959 were released on the Pacific Jazz label.
From 1959 Montgomery was signed to the Riverside Records label, and remained there until late 1963, just before the company went bankrupt. The recordings made during this period are widely considered by fans and jazz historians to be Montgomery's best and most influential. Two sessions in January 1960 yielded The Incredible Jazz Guitar of Wes Montgomery, which was recorded as a quartet with pianist Tommy Flanagan, bassist Percy Heath and drummer Albert "Tootie" Heath. The album featured two of Montgomery's most well-known compositions, "Four on Six" and "West Coast Blues."
Almost all of Montgomery's output on Riverside featured the guitarist in a small group setting, usually a trio (and always with his organist from his Indianapolis days, Melvin Rhyne), a quartet, or a quintet, playing a mixture of hard-swinging uptempo jazz numbers and quiet ballads. The lone exception, Fusion, telegraphed his post-Riverside career: it was his first recording with a string ensemble. One of the more memorable sets involved a co-leadership collaboration with vibraphone virtuoso and Modern Jazz Quartet mainstay Milt Jackson, whom producer Orrin Keepnews has said insisted on a collaboration with Montgomery as a condition for signing a solo recording deal with Riverside.
In 1964 Montgomery moved to Verve Records for two years. His stay at Verve yielded a number of albums where he was featured with an orchestra—brass-dominated (Movin' Wes), string-oriented (Bumpin', Tequila), or a mix of both (Goin' Out of My Head, California Dreamin').
But he never abandoned jazz entirely in the Verve years, whether with a few selections on most of the Verve albums, or by such sets as 1965s Smokin' at the Half Note (showcasing two memorable appearances at the famous New York City club with the Wynton Kelly Trio) or a pair of albums he made with jazz organ titan Jimmy Smith, The Dynamic Duo and Further Adventures of Jimmy and Wes). He continued to play outstanding live jazz guitar, as evidenced by surviving audio and video recordings from his 1965 tour of Europe.
As a considered founder of the smooth jazz school the album Bumpin' (1965) represents a model from which many modern recording are derived: as the liner notes to the CD remaster issue note, after being unable to produce the desired results by the guitarist and orchestra playing together, arranger Don Sebesky suggested Montgomery record the chosen music with his chosen small group, after which Sebesky would write the orchestral charts based on what Montgomery's group had produced. Longer clips from all of the tracks on Bumpin' and other Wes Montgomery albums are found on Verve Records website.
By the time Montgomery released his first album for A&M Records, he had seemingly abandoned jazz entirely for the more lucrative pop market, though as in his Verve period he played his customary jazz in small group settings in live appearances. The three albums released during his A&M period (1967–68) feature orchestral renditions of famous pop songs ("Scarborough Fair", "I Say a Little Prayer", "Eleanor Rigby", etc.) with Montgomery reciting the melody with his guitar. These records were the most commercially successful of his career, but featured the least jazz improvisation. 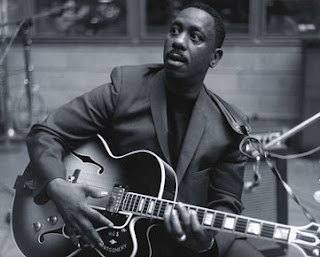 
JW: How did you meet Creed Taylor?
DS: One day in 1965, I was writing in my home studio in North Branch, N.J., when the phone rang. Creed was on the other end. He said, “I heard something you did and want you to arrange an album for me.”


JW: Was that Wes Montgomery’s Bumpin’?
DS: Yes. On the first day of recording, we went into the studio with Wes, the rhythm section and all the strings. But nothing went well. The session wasn’t happening. Wes, who always smiling, wasn’t smiling.


JW: Why?
DS: I went up to him and asked what was going on. He said, “I can’t compete with these cats. They all went to Juilliard.” Wes didn’t read music.


JW: What did you do?
DS: I sent everyone home except the rhythm section. I decided to tape them swinging on each track. Then later I recorded the orchestra and overdubbed Wes' tracks. Engineer Rudy [Van Gelder] liked the idea since we had contained Wes' guitar sound by recording this way. There wouldn't be any sonic leakage. Instead of writing complete arrangements, though, I’d write in a loose form so that orchestra would sound natural around Wes' solo playing.


JW: What did this do for you?
DS: On later albums, like California Dreaming, Herbie [Hancock] on piano would play a lick, for example, and Wes would react to that. The whole point was to give the rhythm section free reign and to capture the rise and fall of the emotional content with the orchestra. When we would do this and one of the guys in the rhythm section would create something inventive, I had a reference, a catalyst that I could use to bounce off of for the arrangement.


JW: In most other cases, recordings were done the other way around—orchestral tracks recorded first, followed by the soloist, wearing headphones, recording his tracks.
DS: I know. The albums I did for Wes sound as though every instrument was scripted. In fact, they were loose enough that I could change the form. We worked them out synergistically. We were kind of helping each other, Wes and the orchestra. The result was a sound that was very natural and breezy.


JW: How did the orchestra hear Wes’ tracks when it recorded later?
DS: The entire orchestra was wearing headphones. The way it came off, it’s almost as if these two halves were intertwining. A give and take on two tracks and a third track for solos. They'd always be reacting to each other.


JW: So how would you arrange a track Montgomery recorded?
DS: I’d take it home and listen to it. Then I'd write around what he was doing or echo his lines. A Wes arrangement became a dual force. It was both a background and a co-conspirator. The guys in the rhythm section who played on the initial tracks were completely unhampered and had complete freedom to come up with lines. My orchestration would then feed off of those lines. This made the orchestra an active participant in the fabric, like a tapestry.