Trouble in Paradise. The troubled story of the glass-walled Farnsworth House. 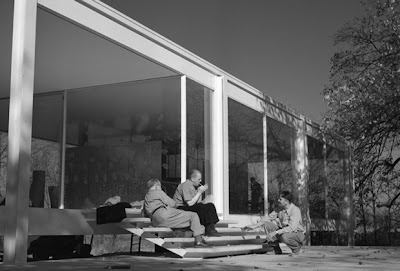 The troubled story of the glass-walled Farnsworth House

Critics called Edith Farnsworth lovesick and spiteful when she filed suit against Mies van der Rohe. More than fifty years later, the glass-walled Farnsworth House still stirs controversy.
Dr. Edith Farnsworth was outraged. "Something should be said and done about such architecture as this," she told House Beautiful magazine, "or there will be no future for architecture."

The target of Dr. Farnsworth's fury was Mies van der Rohe, who had built for her a house made almost entirely of glass. "I thought you could animate a predetermined, classic form like this with your own presence. I wanted to do something 'meaningful,' and all I got was this glib, false sophistication," Dr. Farnsworth complained.

Mies van der Rohe and Edith Farnsworth had been friends. Gossips suspected that the prominent physician had fallen in love with her brilliant architect. Perhaps they had been romantically involved. Or, perhaps they had merely become enmeshed in the passionate activity of co-creation. Either way, Dr. Farnsworth was bitterly disappointed when the house was completed and the architect was no longer a presence in her life.

Dr. Farnsworth took her disappointment to court, to newspapers, and eventually to the pages of House Beautiful magazine. The architectural debate mingled with 1950s cold war hysteria to create a public outcry so loud that even Frank Lloyd Wright joined in.

When Dr. Farnsworth asked Mies van der Rohe to design her weekend getaway, he drew upon ideas he had developed (but never built) for another family. The house he envisioned would be austere and abstract. Two rows of eight steel columns would support the floor and roof slabs. In between, the walls would be vast expanses of glass.
Dr. Farnsworth approved the plans. She met with Mies often at the work site and followed the progress of the house. But four years later, when he handed her the keys and the bill, she was stunned. Costs had soared to $73,000 -- equivalent to nearly half a million dollars today. Heating bills were also exorbitant. Moreover, she said, the glass-and-steel structure was not livable.

Mies van der Rohe was baffled by her complaints. Surely the doctor did not think that this house was designed for family living! Rather, the Farnsworth House was meant to be the pure expression of an idea. By reducing architecture to "almost nothing," Mies had created ultimate in objectivity and universality. The sheer, smooth, unornamented Farnsworth House embodied the highest ideals of the new, utopian International Style.
Dr. Farnsworth sued, but her case did not stand up in court. She had, after all, approved the plans and supervised the construction. Seeking justice, and then revenge, she took her frustrations to the press.

In April 1953, House Beautiful magazine responded with a scathing editorial which attacked the work of Mies van der Rohe, Walter Gropius, Le Corbusier, and other followers of the International Style. The style was described as a "Threat to the New America." The magazine insinuated that Communist ideals lurked behind the design of these "grim" and "barren" buildings.

To add fuel to the fire, Frank Lloyd Wright joined in the debate. Wright had always opposed the bare bones architecture of the International School. But he was especially harsh in his attack when he joined in the House Beautiful debate. "Why do I distrust and defy such 'internationalism' as I do communism?" Wright asked. "Because both must by their nature do this very leveling in the name of civilization."

According to Wright, promoters of the International Style were "totalitarians." They were "not wholesome people," he said.

Eventually, Dr. Farnsworth settled into the glass-and-steel house and begrudgingly used it as her vacation retreat until 1972. Mies's creation was widely praised as a jewel, a crystal and a pure expression of an artistic vision. However, the doctor had every right to complain. The house was -- and still is -- riddled with problems.

First of all, the building had bugs. Real ones. At night, the illuminated glass house turned into a lantern, drawing swarms of mosquitos and moths. Dr. Farnsworth hired Chicago architect William E. Dunlap to design bronze-framed screens. The next owner, Lord Peter Palumbo, removed the screens and installed air conditioning -- which also helped with the building's ventilation problems.

But some problems have proved to be unresolvable. The steel columns rust. They frequently need sanding and painting. The house sits near a stream. Severe flooding has caused damage that required extensive repairs. The house, which is now a museum, has been beautifully restored, but it requires ongoing care.

It's difficult to imagine Edith Farnsworth tolerating these conditions for more than twenty years. There must have been moments when she was tempted to throw stones at Mies's perfect, glistening glass walls.

I was famous before. She is now famous throughout the world.
Mies, of Edith Farnsworth, under oath

Mies reminded me of a mediaeval peasant.
Edith Farnsworth, of Mies
In / http://chicagotonight.wttw.com/2012/11/20/mies-van-der-rohe

I think the house is perfectly constructed, it is perfectly executed.
Mies, about the Farnsworth House, under oath
In 1945 Edith Farnsworth, a Chicago physician, purchased nine acres of an old farmstead bordering the Fox River near Plano, Illinois, sixty miles southwest of Chicago. The seller was Colonel Robert R. McCormick, publisher of the Chicago Tribune. The sale price was $500 per acre. A farmhouse and several outbuildings stood on the property, but Farnsworth wanted something new. In an unpublished memoir from the 1970s, she recalled her project’s beginnings:
One evening I went to have dinner with Georgia [Lingafelt] and Ruth [Lee] in their pleasant old- fashioned apartment in the Irving. Also invited that evening was the massive stranger whom Georgia, with her peculiarly sweet smile, introduced, as I slipped off my coat: “This is Mies, darling.”

I suppose he must have formed a few syllables as we had dinner, but if so, I do not remember them. My impression is that the three of us chatted among ourselves around the granite form of Mies. I related in detail, probably too much, the story of finding the property, the dickerings with Col. McCormick and the final acquisition of the nine- acre plot….

All of this came to naught, conversationally speaking, and I concluded that Mies spoke almost no English; how much he understood remained problematical. We moved back to the sitting room after dinner and both Ruth and Georgia disappeared to wash the dishes.

“I am wondering whether there might be some young man in your office who would be willing and disposed to design a small studio weekend-house worthy of that lovely shore.”

The response was the more dramatic for having been preceded by two hours of unbroken silence. “I would love to build any kind of house for you.” The effect was tremendous, like a storm, a flood or other act of God. We planned a trip to Plano together, so that I could show him the property…. We set out for a day in the country, to inspect the property with a view to the ideal weekend house. It was either late autumn or late winter [of 1944–45] when I stopped at 200 East Pearson to call for Mies, and he came out wearing an enormous black overcoat of some kind of soft, fine wool which reached well down toward his ankles. Installed beside me in the little Chevrolet he put up only feeble resistance to the advances of my white cocker who sprawled across his knees for the duration of the trip.

Finally we reached the dooryard of the farmhouse and I could open the car doors. The emergence of Mies and the cocker was spectacular, as it turned out that the latter had yielded most of his white coat in a soft frosting over the black wool of that splendid overcoat, and we had nothing on board with which to remove it.
We walked down the slope, through the frozen meadow grass and dormant brush, and I worried for fear a European might be unable to see the beauty of the mid-west countryside at so unfavorable a season; but midway down, Mies stopped and looked all around him. “It is beautiful!” he said, and I didn’t doubt the spontaneity of his exclamation.

This is the beginning of the tale as remembered by Farnsworth, then in her seventies. Remarkably, we have Mies’s quite different version of the same events, offered in 1952 as testimony in the action Van der Rohe v. Farnsworth:

Question, to Mies: Will you state what your conversation was with Dr. Farnsworth that evening?

Answer, by Mies: After dinner Dr. Farnsworth said that she had a site in Plano, and she would like to talk with me about a house she had planned there and then we were left alone and we talked about the site. She told me she wanted to build a small house and asked me if I would be interested in doing that. I said normally I don’t build small house but I would do it if we could do something interesting.

Q: Did you explain what you meant by “interesting”?

Mies added that he learned that before she met him, Farnsworth had asked Chicago architect George Fred Keck to design the house. Keck, said Mies, would undertake the project only on condition that he “can do what he wants, and she didn’t seem to like that.” 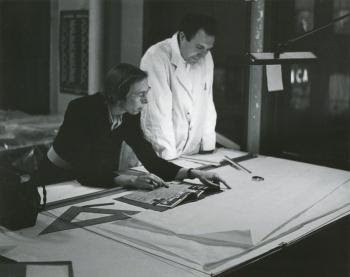