"The Women". Frank LLoyd Wright and his many Wives. 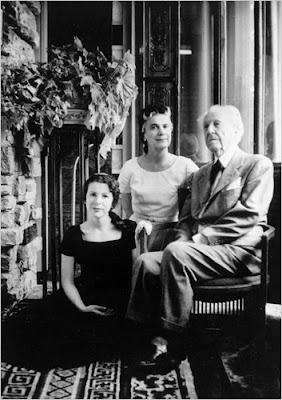 "Local gossips noticed Wright's flirtations, and he developed a reputation in Oak Park as a man-about-town. His family had grown to six children, but Wright was not paternal and the brood required most of Catherine's attention. In 1903, Wright designed a house for Edwin Cheney, a neighbor in Oak Park, and immediately took a liking to Cheney's wife, Mamah Borthwick Cheney. Mamah Cheney was a modern woman with interests outside the home. She was an early feminist and Wright viewed her as his intellectual equal. The two fell in love, even though Wright had been married for almost 20 years. Often the two could be seen taking rides in Wright's automobile through Oak Park, and they became the talk of the town. Wright's wife, Kitty, sure that this attachment would fade as the others had, refused to grant him a divorce. Neither would Edwin Cheney grant one to Mamah. In 1909, even before the Robie House was completed, Wright and Mamah Cheney went together to Europe, leaving their own spouses and children behind. The scandal that erupted virtually destroyed Wright's ability to practice architecture in the United States.

Scholars argue that he felt by 1907 that he had done everything he could do with the Prairie Style, particularly from the standpoint of the single-family house. Wright was not getting larger commissions for commercial or public buildings, which frustrated him.

What drew Wright to Europe was the chance to publish a portfolio of his work with Ernst Wasmuth, who had agreed in 1909 to publish his work there. This chance also allowed Wright to deepen his relationship with Mamah Cheney. Wright and Cheney left the United States in 1909 going to Berlin, where the offices of Wasmuth were located.

The resulting two volumes, titled Studies and Executed Buildings of Frank Lloyd Wright, were published in two editions, creating the first major exposure of Wright's work in Europe. The work contained more than 100 lithographs of Wright's designs and was commonly known as the Wasmuth Portfolio.

Wright remained in Europe for almost one year and set up home first in Florence, Italy – where he lived with his eldest son Lloyd – and later in Fiesole, Italy where he lived with Mamah. During this time, Edwin Cheney granted Mamah a divorce, though Kitty still refused to grant one to her husband. After Wright's return to the United States in October 1910, Wright persuaded his mother to buy land for him in Spring Green, Wisconsin. The land, bought on April 10, 1911, was adjacent to land held by his mother's family, the Lloyd-Joneses. Wright began to build himself a new home, which he called Taliesin, by May 1911. The recurring theme of Taliesin also came from his mother's side: Taliesin in Welsh mythology was a poet, magician, and priest. The family motto was Y Gwir yn Erbyn y Byd which means "The Truth Against the World"; it was created by Iolo Morgannwg who also had a son called Taliesin, and the motto is still used today as the cry of the druids and chief bard of the Eisteddfod in Wales.

On August 15, 1914, while Wright was working in Chicago, Julian Carlton, a male servant from Barbados who had been hired several months earlier, set fire to the living quarters of Taliesin and murdered seven people with an axe as the fire burned. The dead included Mamah; her two children, John and Martha; a gardener; a draftsman named Emil Brodelle; a workman; and another workman's son. Two people survived the mayhem, one of whom helped to put out the fire that almost completely consumed the residential wing of the house. Carlton swallowed muriatic acid immediately following the attack in an attempt to kill himself. He was nearly lynched on the spot, but was taken to the Dodgeville jail. Carlton died from starvation seven weeks after the attack, despite medical attention.

In 1922, Wright's first wife, Kitty, granted him a divorce, and Wright was required to wait one year until he married his then-partner, Maude "Miriam" Noel. In 1923, Wright's mother, Anna (Lloyd Jones) Wright, died. Wright wed Miriam Noel in November 1923, but her addiction to morphine led to the failure of the marriage in less than one year. In 1924, after the separation but while still married, Wright met Olga (Olgivanna) Lazovich Hinzenburg at a Petrograd Ballet performance in Chicago. They moved in together at Taliesin in 1925, and soon Olgivanna was pregnant with their daughter, Iovanna, born on December 2, 1925.

On April 20, 1925, another fire destroyed the bungalow at Taliesin. Crossed wires from a newly installed telephone system were deemed to be responsible for the blaze, which destroyed a collection of Japanese prints that Wright declared invaluable. Wright estimated the loss at $250,000 to $500,000. Wright rebuilt the living quarters again, naming the home "Taliesin III".

In 1926, Olga's ex-husband, Vlademar Hinzenburg, sought custody of his daughter, Svetlana. In October 1926, Wright and Olgivanna were accused of violating the Mann Act and arrested in Tonka Bay, Minnesota. The charges were later dropped. During this period, Wright designed Graycliff (1926–31), the summer estate of Isabelle and Darwin D. Martin.

Wright and Miriam Noel's divorce was finalized in 1927, and once again, Wright was required to wait for one year until marrying again. Wright and Olgivanna married in 1928." 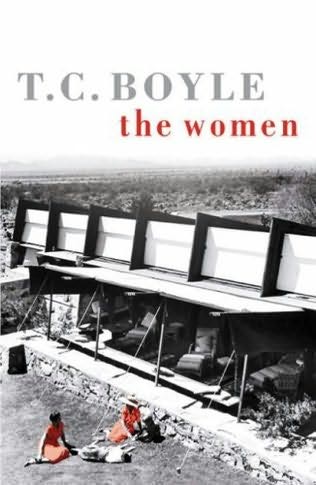 Architect of desire: Frank Lloyd Wright's private life was even more unforgettable than his buildings
While Frank Lloyd Wright designed some of the most beautiful buildings of the 20th century his personal life was falling down around his ears. On the 50th anniversary of his death, Marcus Field tells a tale of axe murder, madness, drugs and redemption

BY MARCUS FIELD   SUNDAY 08 MARCH 2009 in The Independent / http://www.independent.co.uk/arts-entertainment/architecture/architect-of-desire-frank-lloyd-wrights-private-life-was-even-more-unforgettable-than-his-buildings-1637537.html

'The Women', by TC Boyle, is published by Bloomsbury at £12.99. Frank Lloyd Wright: From Within Outward is at the Guggenheim Museum, New York, 15 May to 23 August 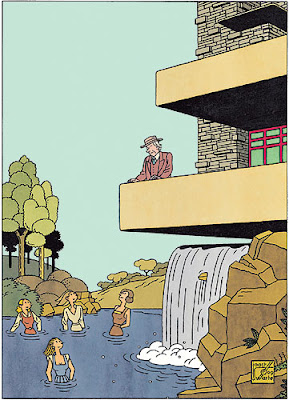 'Slow Pay Frank' and his many wives

Like so many self-styled great men, Frank Lloyd Wright appears to have elevated selfishness to a fine art. TC Boyle's 12th novel, The Women, opens with an epigraph attributed to Wright: "Early in life I had to choose between honest arrogance and hypocritical humility; I chose arrogance."