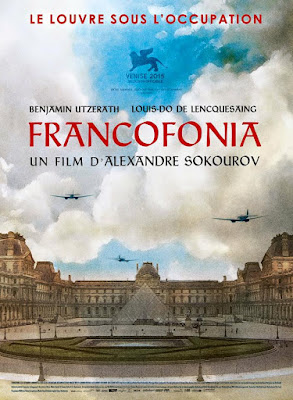 Francofonia is a 2015 French drama film directed by Alexander Sokurov. It was screened in the main competition section of the 72nd Venice International Film Festival and in the Masters section of the 2015 Toronto International Film Festival. Variety defined it as a "dense, enriching meditation on the Louvre and specifically (but not exclusively) the museum’s status during WWII". 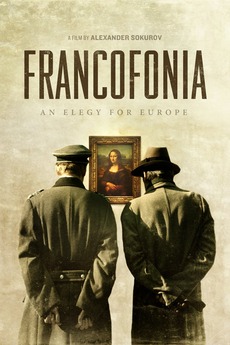 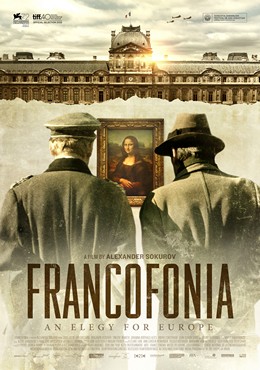 It will be impossible to neatly package “Francofonia” into a brief and accurate description, since Alexander Sokurov’s dense, enriching meditation on the Louvre and specifically (but not exclusively) the museum’s status during WWII defies categorization. View the trailer and you might think the film is essentially a Sokurovian dramatization of the uncertain relationship between the Louvre’s wartime director and the Nazi officer in charge of preserving France’s artistic patrimony. Watching the film, however, a larger picture emerges, in which Sokurov, via his rather too present voiceover, engages with Paris itself and the philosophical concept of a great museum. More accessible than “Faust,” though definitely not one for the History Channel, “Francofonia” will please the Russian auteur’s fans but is unlikely to win him new converts.

Viewers who have been following the director’s career since the early days will be especially attuned to the way he incorporates so many themes he’s addressed before, from the early documentaries about artists (works by French painter Hubert Robert get handsome closeups) to his pics on 20th-century rulers and, of course, “Russian Ark.” It would be wrong though to think of “Francofonia” as a summation, since that word connotes a certain finality, and it’s clear that Sokurov has much more to say about art’s often precarious journey through history. In fact, in some ways the film feels almost like an intro (it runs just under 90 minutes), as if the helmer’s verbose narration were a lead-in to a fuller engagement with his musings.

A constant shuffling of layers is one of the film’s hallmarks: It cuts from deathbed photos of Chekhov and Tolstoy to a Skype conversation that Sokurov has with a ship captain, then shifts to the warm glow of 1940-set scenes between Louvre head Jacques Jaujard (Louis-Do de Lencquesaing) and German officer Count Franziskus Wolff Metternich (Benjamin Utzerath). In between are lessons on the Louvre’s centuries-long construction; archival footage of Parisians getting on with their lives during the Nazi Occupation; reflections on how portraiture shaped European civilization; and the spirit of Napoleon (Vincent Nemeth) walking the museum’s grand galleries, occasionally encountering the personification of France, Marianne (Johanna Korthals Altes).

Does it all come together? Well, yes, if viewers think of the film as a freewheeling poetic essay, highly personal yet captivating. The pic’s core (or perhaps merely the hook?) is the relationship between Jaujard and Wolf Metternich, vanquished and conqueror, and how both men were intent on protecting the Louvre’s treasures. By the time the Nazis rolled into Paris in 1940, almost all the works of art had already been transferred to a series of safer chateaux across France, but the highly cultured, French-speaking German aristocrat would go on to defy his commanders and continue to keep France’s museum holdings protected from deportation to the Third Reich.

Sokurov, a devoted Francophile, ponders why the Nazis safeguarded Paris while deliberately destroying so many cities of Eastern Europe, especially Leningrad, whose Hermitage suffered so greatly during the War. Perhaps it’s the same reason why we still feel a kick in the stomach when watching footage of Hitler in front of the Eiffel Tower: Paris represents more than just France, just as the Louvre is more than a building full of extraordinary masterworks. Napoleon, of course, understood this, which is why so many of the Louvre’s holdings can be directly traced to him — Sokurov has his ghost repeatedly say “I brought all of this!” while Marianne continuously exclaims, “Liberty, Equality, Brotherhood.”

Through the vicissitudes of time, the art itself stares back with unblinkered directness: Assyrian winged bulls and Clouet portraits have been bargaining chips through no action of their own, and history, like a stormy sea, occasionally drags them down into its unmarked graveyard. Museums act as bulwarks against such erasures, which is why Sokurov plays with the ship metaphor via his invented Skype chats with a captain whose cargo of art treasures is at risk of either sinking the ship in a wild tempest or being jettisoned to save the vessel. Whether such a metaphor works in a film already loaded with interconnected subjects will greatly depend on how much viewers understand what the director is doing with these sequences.

Most everyone, however, will agree that “Francofonia” looks terrific. Working again with noted d.p. Bruno Delbonnel, Sokurov has designed a rich and varied palette of textures and tones that makes for constantly renewed visual pleasures. Some images have an amber patina like the centuries-old varnish on Old Master paintings in the Hermitage, while dramatizations from the early 1940s have a flickering glow that imitates color nitrate stock screened through a carbon-arc projector. Some of these “films” are treated like artifacts themselves, with the sound strip visible, and at other times, with the sprocket holes showing. Oddly, no production designer or art director is credited; the print shown in Venice has a sweeping orchestral coda at the finale but no end credits.
http://variety.com/2015/film/festivals/francofonia-review-alexander-sokurov-venice-film-festival-1201585728/ 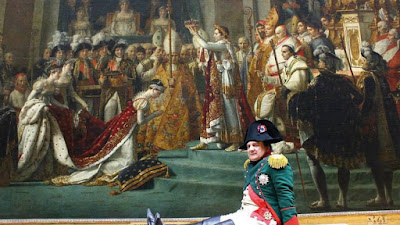 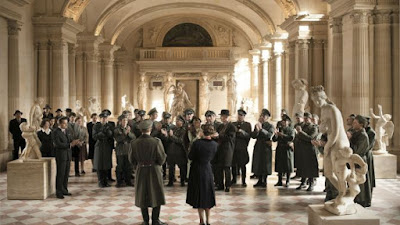 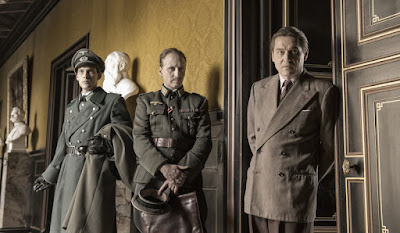 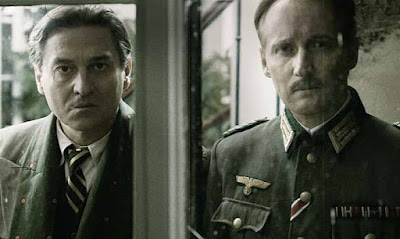