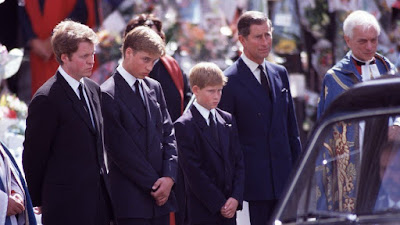 The Duke of Sussex has said he was willing to drink and take drugs to try to cope with his mother's death.

He has also spoken about his family's unwillingness to talk about the death of Diana, Princess of Wales, and how he was expected to "suffer" in silence.

Prince Harry was talking to US talk show host Oprah Winfrey in their new streaming series on mental health.

He also talked about anxiety and panic attacks, his "biggest regret" and his experience of his mother's funeral.

Princess Diana died in a car crash while being pursued by photographers in Paris in August 1997.

Speaking to Winfrey for the Apple TV+ series The Me You Can't See, Harry described being aged 28 to 32 as "a nightmare time in my life", in which he had panic attacks and severe anxiety.

"I was just all over the place mentally," he said.

"Every time I put a suit on and tie on... having to do the role, and go, 'right, game face,' look in the mirror and say, 'let's go'. Before I even left the house I was pouring with sweat. I was in fight or flight mode."

He said he would drink a week's worth of alcohol on a Friday or Saturday night, "not because I was enjoying it but because I was trying to mask something".

The duke also told Winfrey his family did not talk about his mother's death and expected him to deal with the resulting press attention and mental distress.

"That doesn't make sense. Just because you suffered doesn't mean that your kids have to suffer, in fact quite the opposite - if you suffered, do everything you can to make sure that whatever negative experiences you had, that you can make it right for your kids."

Prince Harry famously walked behind his mother's coffin at her funeral, alongside his brother, father, uncle and grandfather.

"For me the thing I remember the most was the sound of the horses' hooves going along the Mall," he said.

"It was like I was outside of my body and just walking along doing what was expected of me. Showing one-tenth of the emotion that everybody else was showing: this was my mum - you never even met her."

In addition to his own unhappiness, Harry told Winfrey about his anger and regret at the way his wife, the Duchess of Sussex, was treated by sections of the media.

"My biggest regret is not making more of a stance earlier on in my relationship with my wife, calling out the racism when I did," he said.

"History was repeating itself.

"My mother was chased to her death while she was in a relationship with someone that wasn't white - and now look what's happened.

"You want to talk about history repeating itself? They're not gonna stop until she dies."

Talking about his mother, Prince Harry said he "no doubt" she would be "incredibly proud" of him for living the life she would have wanted and added that one of his son Archie's first words was "grandma".

"I got a photo up in his nursery and it was one of the first words that he said, apart from 'mama', 'papa' it was then 'grandma', Grandma Diana," he said.

"It's the sweetest thing, but at the same time it makes me really sad, because she should be here."

The prince, 36, has campaigned for discussions around mental health to be normalised, and started speaking in detail about his personal experiences recently.

In March, he and his wife Meghan were interviewed by Winfrey about their life in the Royal Family, and its impact on their mental health.

And on a podcast last week, Prince Harry said he was determined to "break the cycle of pain" of his upbringing when parenting his own children, and shared that he had gone to therapy.

The duke said the happiest time of his life was his 10 years in the Army, as there was no "special treatment" for him.

He left the Army aged 30, and met his wife-to-be Meghan on a blind date a year later.

The duke said family members previously told him "just play the game and your life will be easier".

"But I've got a hell of a lot of my mum in me," he said. "I feel as though I am outside of the system - but I'm still stuck there. The only way to free yourself and break out is to tell the truth."

The streaming series sees Prince Harry, Winfrey, Lady Gaga, Glenn Close and others tell their own stories about mental health and wellbeing.

It was first announced in April 2019, almost a year before Harry and Meghan announced they were stepping back as senior royals in January 2020.