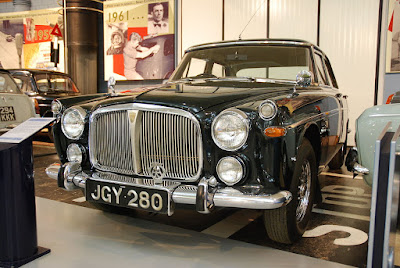 The final iteration of the P5 appeared in September 1967.[7] Now powered by the 3,528-cubic-centimetre (215.3 cu in) Rover V8 engine also used in the 3500, the car was badged as the "3.5 Litre", and commonly known as the 3½ Litre. The final letter in the "P5B" model name came from Buick, the engine's originator. Rover did not have the budget to develop a new engine, hence they chose to redevelop the lightweight aluminium Buick engine, making it considerably stronger. While this added some weight, it still maintained the engine's light and compact features. The Borg Warner Type-35 automatic transmission, hydrosteer variable ratio power steering and front Lucas fog lights were now standard.

The exterior was mostly unchanged, apart from bold "3.5 Litre" badging, a pair of fog lights which were added below the headlights, creating a striking four-light array, and the fitting of chrome Rostyle wheels with black painted inserts. The P5B existed as both the 4-door coupé and saloon body style until end of production. Production ended in 1973, by when 9,099 coupés and 11,501 saloons had been built.

The 3½ Litre saloon variant was a favourite of high-ranking government ministers, and served as Prime Ministerial transport for Harold Wilson, Edward Heath, James Callaghan, and Margaret Thatcher. As testament to their suitability, the last batch of P5Bs to roll off the Rover line in June 1973 was purchased by the British government and placed in storage, to be released for government use as required. For that reason, registered relatively new-looking P5s were therefore still familiar sights in Westminster for more than a decade after production had ended.

When Margaret Thatcher entered Downing Street in 1979 after her election victory, she was driven in a 1972 model. It was during Thatcher's eleven-year tenure that the P5 was eventually phased out as a Prime-Ministerial car, in favour of the Jaguar XJ.

Queen Elizabeth II also owns an Arden Green Rover P5B Saloon "JGY 280", which is on display at the Heritage Motor Centre, Gaydon, Warwickshire and was seen in the 18 May 2003 episode of BBC motoring show, Top Gear.