The Triumph Spitfire is a British front-engined, rear-wheel drive, two-passenger convertible sports car introduced at the London Motor Show in 1962 and manufactured between 1962-1980. Styled for Standard-Triumph in 1957 by Italian designer Giovanni Michelotti, the Spitifire was manufactured for the duration of its production at the Standard-Triumph Canley works — and evolved over a series of five production iterations, with a approximately 315,000 manufactured over 18 years.

Developed on a shortened variant of the Triumph Herald saloon/sedan's chassis, the Spitifire shared the Herald's running gear and Standard SC engine. The design used body-on-frame construction, augmented by structural components within the bodywork and rear trailing arms attached to the body rather than the chassis. A manually deployable convertible top, substantially improved on later models, provided weather protection and a bespoke hard-top was available as a factory option.

Popular in street and rally racing, Spitfires won numerous SCCA National Sports Car Championships in F and G Production classes; won its class at the 1964 Tour de France rally, coming in second overall, and won the 1964 Geneva Rally. In 1965, a Spitfire won its class in the Alpine Rally.

The Spitfire nameplate refers to the World War II fighter plane of the same name.[7] Assembled at Canley in August 1980 shortly before the factory closed, the last Spitfire was an Inca Yellow UK-model including the factory hardtop and overdrive options. Never sold to the public, it remains on display at the British Motor Museum.

The Spitfire was conceived by Standard-Triumph to compete in the small sports car market against the Austin-Healey Sprite. The Sprite had used the drive train of the Austin A30/A35 in a lightweight. The Spitfire used mechanicals from the Herald saloon/sedan. Where the Austin A30 used monocoque construction, the Herald used body-on-frame — a chassis Triumph was able to downsize, saving the cost of developing a completely new chassis-body unit.

Giovanni Michelotti, who had designed the Herald, styled the bodywork, which featured wind-up windows (in contrast to the Sprite and Midget, which used side curtains) and an assembly of the bonnet/hood and wings/fenders that opened forward for engine access. The Spitfire's introduction was delayed by its company's financial troubles in the early 1960's and was subsequently announced shortly after Standard Triumph was taken over by Leyland Motors. When Leyland officials, taking stock of their new acquisition, found Michelotti's prototype under a dust sheet in a factory corner, it was quickly approved it for production. 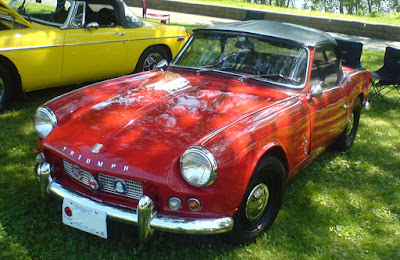 The production design changed little from the prototype: the full-width rear bumper was replaced by two part-bumpers curving around each corner, with overriders. Mechanicals derived from the Herald saloon/sedan, with the notable addition of front disc brakes. Bodywork was bolted to the much-modified Herald chassis, the outer rails and the rear outriggers having been removed; with structural outer sills to stiffen the overall design.

The engine was an 1,147 cc (70.0 cu in) four-cylinder with a pushrod OHV cylinder head and two valves per cylinder, using twin SU carburettors. The Herald's rack and pinion steering and coil-and-wishbone front suspension carried over, having derived from systems used by the former Alford & Alder company that had been acquired by Standard-Triumph in 1959.

Rear suspension was by a single transverse-leaf swing axle,[8] an arrangement, that unless ameliorated by any of several options, can allow rear tires to undergo large camber changes during fast cornering, leading to oversteer – a dynamically unstable condition in which a vehicle can lose control and spin. As did many manufacturers who used a swing axle arrangement (e.g., Mercedes, Renault, Volkswagen]], Triumph would later modify the rear suspension. In 1970, the rear suspension was decambered, by incorporating what Triumph called a "swing spring". One leaf was eliminated from the stack and only the bottom leaf was attached rigidly to the differential. The remaining leaves were mounted to pivot freely — thereby eliminating the worst characteristics of the original swing-axle design.

The Spitfire was an inexpensive small sports car and as such received rather basic trim by today's standards, including rubber mats and a large plastic steering wheel. It was nonetheless considered fairly comfortable at the time, as it had roll-down windows and exterior door locks, as well as relatively full instrumentation. These early cars were referred to both as "Triumph Spitfire Mark Is" and "Spitfire 4s",[1] different from the later Spitfire Mark IV. The "Spitfire 4" name indicated the possibility of the appearance of a six-cylinder version.

For 1964 an overdrive became optional to the four-speed manual gearbox.[4] Wire wheels and a hard top were also available.

An all-monocoque construction derivative of the Spitfire with pop-up headlamps, named the Triumph Fury, was proposed with a single prototype being built. 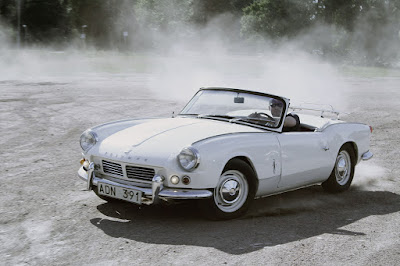 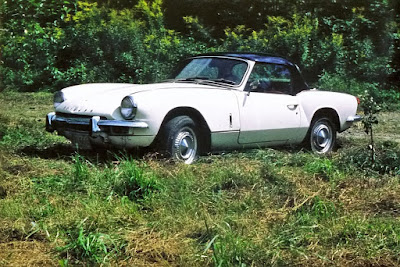 The Mark III, introduced in March 1967, was the first major facelift to the Spitfire. The front bumper was raised in response to new crash regulations, and the front coil springs were slightly raised. Slightly revised bonnet pressings were carried over. Rear overriders were deleted and bumper mounted reversing lights became standard (initially as two separate lights on either side of the number plate, latterly as a single light in a new unit above the number plate). The interior received a wood-veneer instrument surround and a smaller, 15-inch, wire spoked steering wheel. A folding hood replaced the earlier, more complicated design. For most of the Mark III range, the instrument cluster remained centre-mounted (as in the Mark I and Mark II), easily accommodating right-hand and left-hand drive versions.

On 8 February 1968, Standard-Triumph general manager George Turnbull drove the 100,000th Triumph Spitfire off the Canley production line. More than 75 per cent of this number had been exported outside the UK, including 45 per cent to the US and 25 per cent to mainland European markets.

Starting in 1969, US-bound models were "federalized" to comply with safety and emissions regulations. A reduced compression ratio of 8.5:1 resulted in a slight decrease in power (68 bhp) and 73 ft-lbs of torque. However, the 0–60 time of 14 seconds was still faster than the Mark II. The instrument panel was moved in front of the driver, and new seats were introduced with integrated headrests to help against whiplash. Cosmetically, the wood dash was replaced with a matte black finished assembly intended to imitate an aircraft cockpit.

The Mk. III's final production year (1970) included an integrated rear reverse and license plate lamp, side lamps at the front and rear and new badging. The separate "Triumph" letters on the front of the bonnet were removed and "Triumph" and "Spitfire" rectangular badges were used in the front, rear sides and rear. A limited number of U.S. market 1970s were adorned with an RAF style "Spitfire" badge (U.K. models had a plain badge without the RAF roundel) that rested in the right corner (car opposing point of view) of the bonnet. Additional exterior changes introduced included a zip up rear window, black radiator grille and a black (vs body colored) windshield surround. Full wheel covers of two styles were used including the 1969 introduced model with "SPITFIRE" circumscribing the hub and a unique derivative without the branding. Interior changes included a steering column mounted ignition switch, a key-in-ignition warning buzzer, driver's side under-dash courtesy lamp and a new black spoked steering wheel. Under the bonnet, some markets had the twin SU carburettors replaced with a single Zenith-Stromberg carburettor. 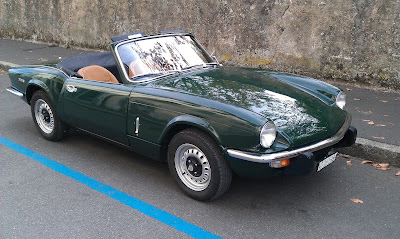 The Mark IV featured a redesigned rear design similar to the Triumph Stag and Triumph 2000 models, both also designed by Michelotti. The front end was revised with a new bonnet pressing eliminating the weld lines on top of the wings/fenders, door handles were recessed, the convertible top received squared-off corners. The interior was revised to include a full-width dashboard, with instruments ahead of the driver rather than over the centre console, initially finished in black plastic and beginning in 1973 finished in wood.

The engine was now rated at 63 horsepower for UK market, employing the 9:1 compression ratio and twin SU HS2 carburetors. The less powerful North American version continued to use a single Zenith Stromberg carburetor and an 8.5:1 compression ratio) due to the German DIN system; the output was the same for the early Mark IV. Performance was slower than the Mark III due to its weight increase taller 3.89:1 final drive as opposed to the earlier 4.11:1.

Importantly, the heavily criticized rear suspension was decambered, incorporating what Triumph called a "swing spring". One leaf of the suspension "stack" was eliminated and only the bottom leaf was attached rigidly to the differential. The remaining leaves were mounted to pivot freely — eliminating the worst characteristics of the original swing-axle. This was a different approach than that taken with the Triumph GT6 Mk II (GT6+) and Triumph Vitesse Mark 2, both of which received new lower wishbones and Rotoflex half-shaft couplings. The result on all these cars was improved handling.