TEFAF Maastricht. I Was There yesterday ... Fabulous ! ... Fantastic ! 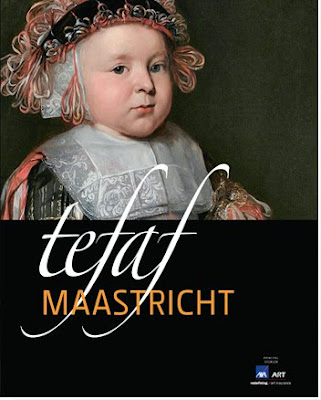 TEFAF Maastricht 2011: a display of masterpieces
Arguably the most important art fair in the world, the 2011 edition of TEFAF Maastricht exhibits an excellent display of art masterpieces, including works by Rembrandt, Renoir and Henry Moore
The most expensive work in the fair is "Portrait of a Man with Arms Akimbo", painted by by Rembrandt in 1658, offered by Otto Naumann Ltd of New York for a hefty $47 million. The work was sold at Christie's London for $33 million in 2009. So, how can this increase in the price be justified? According to the press note published by TEFAF, "since the painting was last auctioned in 2009 it has been transformed by cleaning and can now be seen in its full glory." Let's see if the collectors agree. Otto Naumann also offers "Architectural Capriccio" by Bernardo Bellotto for €8.2 million.

Maybe the most impressive work in the fair is "Mother and child block seat", a 8ft high bronze sculpture by Henry Moore, offered by Landau Fine Art of Montreal. Cast in an edition of nine in 1983, three years before Moore’s death, the work was described by its creator as “the big form protecting the small form”. The press note by TEFAF says that the work is "compelling". Talking about sculptures, Spanish dealer Deborah Elvira exhibits "Ecce Homo", one of the few sculptures by El Greco.

An important name in this edition of TEFAF is Pierre-Auguste Renoir. "Femme cueillant des Fleurs", one of the most important early works by Renoir still in private hands, is being offered by Dickinson for $15 million. Hammer Galleries from New York exhibits "La leçon (Bielle, l’institutrice et Claude Renoir lisant)", painted in 1906. In addition, Stephen Ongpin from London will shows "Study of a Bather", a preparatory work for his painting "Bathers in the Forest", owned by the Barnes Foundation. The price? A "modest" £125,000.

Time for antiquities: Galerie Harmakhis from Brussels shows the work that is arguably the most fascinating piece of art exhibited at TEFAF: the last fragment of an Egyptian water clock in private hands, which carries a quite modest price of €150,000. Rupert Wace Ancient Art of London offers an important Greek idol dating from the Late Neolithic period. The 4.6in high white marble figure of a woman carries a price in excess of €1 million. 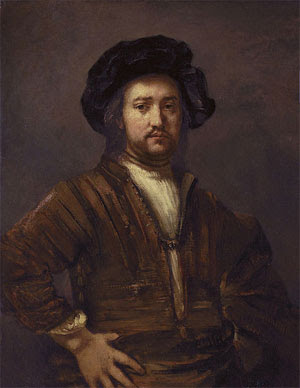 The most expensive work in the fair is "Portrait of a Man with Arms Akimbo", painted by by Rembrandt in 1658, offered by Otto Naumann Ltd of New York for a hefty $47 million. 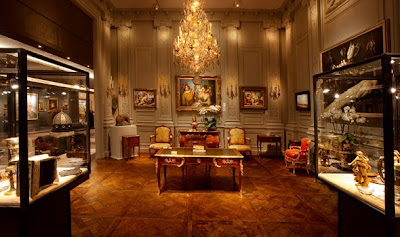 What makes TEFAF so special?
By Georgina Adam


While many traditional art and antique fairs have languished in the past few years, one event sails serenely along, largely defying the recession: The European Fine Art Fair (TEFAF), held in Maastricht next month – March 12-21 – has been highly successful in maintaining its status and position as the number one classic art fair in the world.

And yet TEFAF should have all the chips stacked against it. In today’s age of the quick fix and high-impact, short-attention-span conceptual artwork, its thrust is mainly, but by no means exclusively, on traditional art and antiques – objects that require patience and connoisseurship to understand and appreciate.

Then there is its location – an out-of-the-way Dutch town that, despite being a well-known name thanks to the Maastricht Treaty, is not on many tourist circuits. Maastricht is hardly rich in luxury hotels or good restaurants and TEFAF has few of the inducements that most other fairs offer: no late-night parties, no lecture programmes, no visits to local collections.

And yet, unfailingly in March, the small local airport is jammed with private jets and the hotels fill up with collectors, museum trustees, dealers and curators visiting the fair. The conference centre is transformed into a glossy showcase for the art on view, with elegantly built stands, deep carpeting, caressing lighting and banks and banks of flowers – roses, tulips and ranunculus this year.

So how does TEFAF maintain its lead, at a time when other fairs are disappearing (Grosvenor House, the Moscow Fine Art Fair, The International Asian Art Fair ... ) or contracting (Olympia, to cite just one)? Last year, in the eye of the global financial crisis, more than 68,000 people visited TEFAF, and on the whole exhibitors were pleasantly surprised by the level of sales.

Cycladic marble head, c.2500 BC
The answer is quite simply quality. The array of art and antiques at the fair cannot be bettered. Dealers really do try to bring the best things. John Mitchell, for example, is showing a newly discovered “Winter Landscape with Skaters” (1611) by Adam van Breen – one of the earliest winter landscapes by any Dutch painter. Chinese art specialist Gisèle Croës has an extraordinary figure of a foreigner dating from the late Sui or early Tang period, while Rupert Wace is showing a stunningly simple Cycladic marble head from 2500-2400BC.

The organisers have a number of ways of keeping the quality up. For a start, it’s tough to get into TEFAF. Only five exhibitors dropped out this year, so there is every reason for a dealer to hang on to a stand once he or she has it. Vetting is stringent, with a posse of experts who pore over the offerings before the opening. “Nowhere else has that level of vetting,” says William Mitchell of the London dealer John Mitchell, an exhibitor at TEFAF for 20 years. “There is a lot of peer pressure to maintain quality, you don’t want to be the one with a sub-standard booth,” says fair chairman Ben Janssens. And for those who don’t keep up, well, they don’t get invited back.

Janssens also thinks that the financial crisis has benefited this fair. “Dealers think, ‘if I only do one fair this year, it will be TEFAF’,” he says. “And the collectors are the same – they may travel less, but they will still make sure they go to Maastricht.” Exhibitor James Ede concurs: “This is the last show I would give up. It is the best,” he says.

The fair has a loyal base of collectors from the Netherlands as well as nearby France, Belgium and Germany. “Interest in collecting has not gone away in these countries, unlike Americans who are more influenced by the economy and who have withdrawn a bit,” says Janssens.

German shell spoon c.1600
The financial crisis plays well to TEFAF in another way. The end of the art boom – which was particularly driven by contemporary art, which has suffered the biggest price drops – saw some buyers scurrying to more secure collecting fields such as Old Master and modern blue-chip paintings as well as objets d’art. In New York last month , the auction houses turned in solid results for Old Master paintings, and some will certainly pop up at TEFAF: about a quarter of the fair is devoted to this speciality. Another particular pleasure is the array of works of art and Kunstkammer objects; this year Georg Laue from Munich is bringing a collection of Renaissance and Baroque cutlery made from amber, ivory, coral or rhino horn, such as a Renaissance shell spoon from c1600.

TEFAF has constantly sought to reinvent itself and broaden the range of works on offer, by adding in 20th-century design, modern art, a section for younger dealers and now works on paper. All this comes at a cost, however: for some, the fair is now too big. The modern section, which comprises 46 dealers (out of a total of 263 exhibitors) and which was started in 1991, has seen the biggest turnover; last year it lost seven exhibitors, including the heavy-hitters Waddington, Mathes, Gray and Acquavella.

London dealer James Roundell, president of the section, admits that it is still “discovering its identity”. “While my vision is to orientate the section towards classic modern, it is important to include contemporary art in the mix,” he says. “This brings in younger visitors. We hope they will look at the other sectors in the fair, which could lead them into collecting in other fields.”

Imperial cutlery case c. 1580
While TEFAF is not the place to find emerging artists, it does have a number of leading galleries showing contemporary art, such as Hauser & Wirth, Christophe Van de Weghe, Sperone Westwater and Ben Brown. One newcomer this year is New York’s L&M Arts, showing De Kooning’s 1982 “Untitled XVI” tagged at €3.7m.

Even pricier is a portrait of George Washington by Gilbert Stuart from 1822, showing the classic image of the president used for the US one dollar bank note. It is being shown by newcomers Hammer Galleries of New York, and is looking for a cool €10m. But, alongside these mega-prices, there are also things for the more modest collector. Lowell Libson is bringing a small group of drawings by John Linnell and Cornelius Varley in the £10,000-£15,000 range. And antiquities specialist Charles Ede will offer a Greek lekythos (perfumed oil flask) from 5th-century BC Athens (£4,000), or an Egyptian stone jar from the Middle Kingdom, c1800BC (£3,500).

“TEFAF can take over your life for two or three days,” says ceramics and contemporary works of art specialist Adrian Sassoon, exhibiting at Maastricht for the third time this year. “It’s thoroughly well organised and everything works, from the parking to places to sit or eat. All in all it’s a great visitor experience.” Which goes some way towards justifying the hefty entry fee of €55 per person (€90 for a couple), which the organisers raised two years ago deliberately to keep numbers down. This, in itself, is testimony to the success of the fair.
. 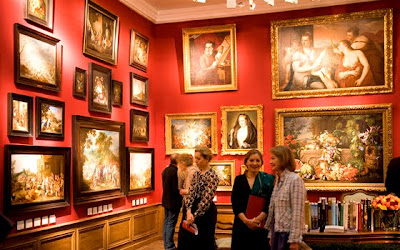 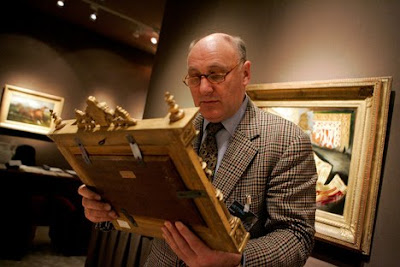 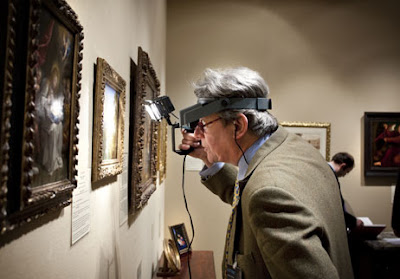 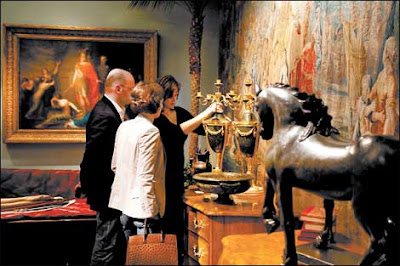 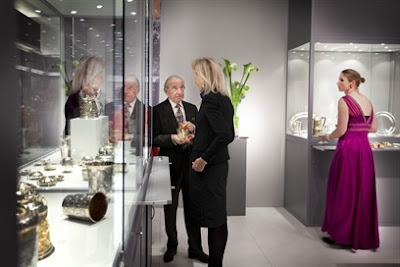 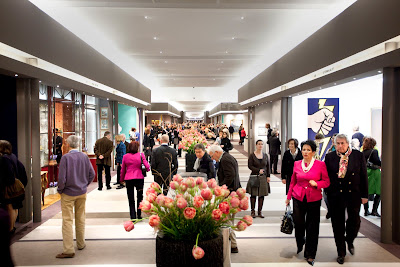 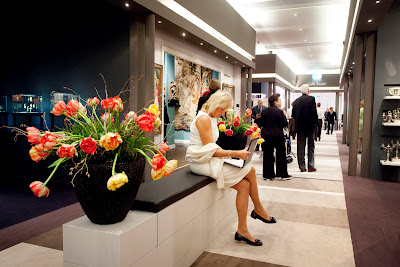