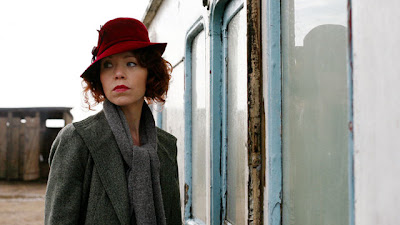 Episode 3
Tomorrow, 21:00 on BBC One
Synopsis
After a highly charged encounter in a Manchester hotel, Sarah and Carne return to the South Riding more at odds with each other than ever, as Andrew Davies's adaptation of Winifred Holtby's rich and panoramic portrait of a Yorkshire community in the Thirties concludes. Sarah, humiliated that Carne is avoiding her, distracts herself with work, her priority being to find a way to get Lydia Holly back to school and away from a future of domestic drudgery looking after her father and younger siblings.

Meanwhile, Councillor Huggins, desperate to claw back the money lost to Reg and Bessie's little scam, cashes in his life insurance to buy up some wasteland for himself. When Carne discovers that his fellow councillors have been pushing up land values to profit from the housing scheme he accuses Councillor Snaith of corruption. It's an unwise move without proof and Snaith sues Carne for slander.

A 10,000 pound lawsuit is the straw that breaks Carne's back; bankruptcy is inevitable. He makes his way to the school to tell Sarah - his pretext is that he must step down as a school governor, but perhaps his real motive for going to her is more personal.

As 1934 gives way to '35, Winifred Holtby's messy, compassionate and humane story comes to a head. Her questions resonate as much in 2011 as they did when she first framed them, asking how we should educate our children and look after our sick and insane, and how we can raise our poor out of poverty. Haltingly, imperfectly, the people of the South Riding search for answers, while Sarah seeks the answer to the most universal question of all: What am I here for.