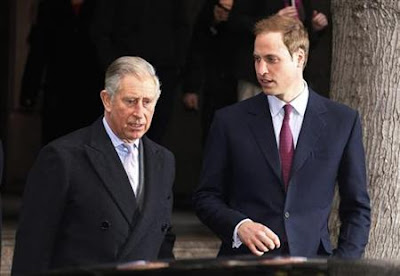 (Reuters) - More Britons want Prince Charles to become Britain's next monarch than his son William despite the huge interest in his upcoming wedding and previous suggestions he was the popular choice, a poll on Thursday said.

Shortly after William's engagement to girlfriend Kate Middleton was announced last November, two polls showed a majority of Britons thought he should succeed the Queen and not heir-to-the-throne Charles.

However, according to a YouGov survey for Prospect Magazine released on Thursday, that sentiment has now been reversed.

Prospect suggested one possible reason for the reversal was that the public felt William and Middleton should be allowed to enjoy as normal-as-possible a life after their April 29 wedding.

British constitutional expert Norman St John-Stevas said there was no possibility that the throne could bypass Charles in any case.

"It would be a major breach of our constitution," he told Reuters TV.

"It would weaken the monarchy, it would make Prince William's task infinitely more difficult, it would be an act of gross injustice to Prince Charles who has done so much for the monarchy."

The poll also found that support for scrapping the monarchy had ebbed away. Shortly after the death of Charles's wife Diana in 1997, when there was widespread anger at the royal family, a quarter of Britons wanted to get rid of them.

The survey found that figure was down to 13 percent.

There was also strong support for an overhaul to a 300-year-old law which gives primacy to male heirs to the British throne.

The poll showed that by a 75-17 percent margin, the public thought the eldest child of the monarch, whatever their sex, should succeed.